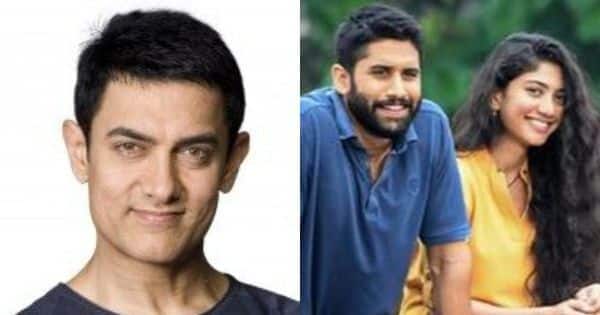 Aamir Khan recently dropped by at the pre-release event of Love Story, starring Naga Chaitanya and Sai Pallavi, much to everyone’s surprise and delight. The superstar was in Hyderabad to spend time with his Laal Singh Chaddha costar, Naga Chaitanya, and decided to make his day as also everyone else’s belonging to the cast and crew of Telugu movie Love Story. And it seems like Aamir Khan is so impressed with the Love Story trailer as also with whatever he’s seen of Naga Chaitanya and Sai Pallavi in it, that he’s now the latest entrant of both their fan clubs. Also Read – Trending Entertainment News Today: Sherlyn Chopra makes shocking revelations in Raj Kundra pornography case, Rakhi Sawant trends on Twitter and more

Effusing praise on Love Story, Aamir said, “Four days back, I watched the trailer of Love Story. As soon as I watched it, I fell in love with it. I came to know that the team is planning an event today. I immediately asked Chaitanya if I could be a part of the event.” Also Read – Laal Singh Chaddha: Here’s how Naga Chaitanya came on board the Aamir Khan, Kareena Kapoor Khan film

Also showering both Chay and Sai with praises, Aamir Khan added, “Naga Chaitanya is the best person I have ever met. We often work with many people but we find a connection only with few people. Naga Chaitanya is one of them. He is the best person ever. He has a great heart. From the time I met him to our shooting days, I had a great time with Chay. I watched her (Sai Pallavi) dance videos on Youtube and I must say that I became her fan” Also Read – Amidst divorce rumours with Naga Chaitanya; Samantha Ruth Prabhu says ‘YES’ to work with a newcomer

Confirming that he’ll definitely be watching Love Story in a theatre, the actor concluded, “The theatres are not functioning in Maharashtra. But, I will watch the film along with all of you on the 24th in a theatre. I will try if I can get permission for a private screening of the film in Mumbai.”