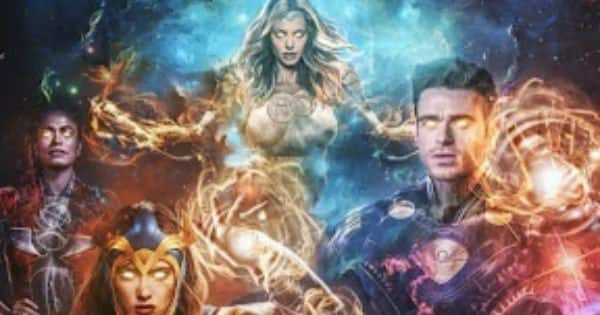 The first reviews of Marvels Eternals are in and they’re not something that head-honcho Kevin Feige is going to look at kindly. Angelina Jolie, Salma Hayek, Kit Harington, Gemma Chan, Richard Madden and Kumail Nanjiani’s new MCU superhero affair is being unanimously heralded as “Marvel’s most disappointing yet even thought it’s not their dullest.” What this also puts into perspective is overrated Director Chloé Zhao’s skills behind the camera as she may have won an Oscar last year for Nomadland, but helming an itsy-bitsy arty piece, with almost a nil budget and zero expectations, and which hardly anybody saw is one thing, and trying to work your way around a mega-budget entry, headlined by actual stars, in a multi-billion dollar franchise, which the entire worlds is waiting for with bated breath, is a completely different ball game altogether. Also Read – Ahead of Eternals release, director Chloé Zhao opens up on Marvel’s first full-blown sex scene and gay character with a LGBTQ+ Family

Nicholas Barber (BBC.com): “Eternals may not be the worst of Marvel’s movies, but it’s undoubtedly the most disappointing.” Also Read – Eternals premiere: Angelina Jolie’s daughter Zahara Jolie-Pitt wears the same gown that her mother wore at Oscars 2014 – view pics

Robbie Collin (Daily Telegraph, UK): “It’s constantly engaged in a kind of grit-toothed authenticity theatre, going out of its way to show you it’s doing all the things proper cinema does, even though none of them bring any discernible benefit whatsoever to the film at hand.” Also Read – The Weeknd-Angelina Jolie new lovebirds? From dating Selena Gomez to drug abuse and plagiarism charges, here’s all you need to know about the Canadian-Ethiopian musician

Justin Chang (Los Angeles Times): “You walk out in the depressing realization that you’ve just seen one of the least interesting movies Chloé Zhao will hopefully ever make.”

READ ALSO |  Kunal Kohli's modern version of the Ramayan is visually appealing, but the writing is as jumbled as Raavan's 10 heads

Nestor Bentancor (Cine Desde Hollywood): “A disappointment of cosmic proportions, Eternals never takes off due to a pedestrian script that wastes a galaxy of talent.”

Rodrigo Perez (The Playlist): “A convoluted cosmic misfire and one of Marvel’s dullest efforts in years.”

Marvels Eternals releases worldwide, including in India, on 5th November.