ARMY showers love on Jimin after he gets nervous on UNGA stage, Jeezy and Jeannie Mai set to become parents and more 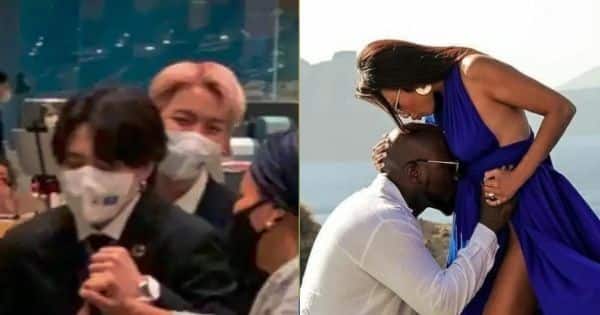 ARMY showers love on Jimin after he gets nervous on UNGA stage, Jeezy and Jeannie Mai set to become parents and more

ARMY showers love on Jimin after he gets nervous on UNGA stage
BTS left everyone amazed once again with their profound speech at the United Nations General Assembly. This is their second one at the coveted venue. They also delivered a performance on Permission To Dance on the premises of the world organization. While all the members stood out with their heartfelt, deep and insightful speeches on how they perceive the youth of today, Jimin’s moments have gone viral. He has been trending with as much as 7-8 hashtags since yesterday. Also Read – Trending Hollywood news today: BTS announces its virtual concert, Britney Spears’ ex-husband feels her engagement is fake and more

Jeezy and Jeannie Mai are all set to become parents
Rapper Jeezy’s wife Jeannie Mai Jenkins is pregnant with their first baby together. The TV host Mai showed off her baby bump during the season eight premiere of ‘The Real’ on Monday, reports Complex.com.

Shawn Mendes announces Wonder: The World Tour
Shawn Mendes announced his world tour in support of his latest album ‘Wonder’. The pop-star took to social media and made the announcement about ‘Wonder: The World Tour’ on Monday night. “TOUR Wonder: The World Tour. Announcing later this week!” he wrote on Instagram with a performance video. The 23-year-old singer announced that he was ready to get back onstage by sharing a 52-second video of himself dancing solo underneath the spotlight to his global chart hit ‘Summer of Love’, which he and Tainy performed at the 2021 MTV VMAs, and ‘Teach Me How to Love’ from Wonder.