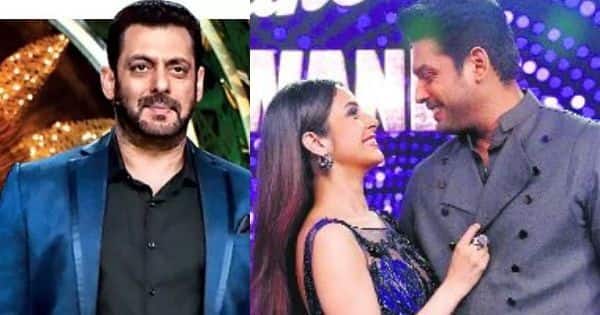 It is time to look at all the important news of this week. The past week has been full of exciting new reports, and we are sure you don’t want to miss out on any of them. So, if you have inadvertently skipped something relevant this week, then catch up on all those stories here. From Bigg Boss 15’s grand launch, ugly fights in first week to Shehnaaz Gill stepping out for the first time post Sidharth Shukla’s demise – we bring you our list of TV newsmakers this week. Also Read – Trending TV News Today: Pranali Rathod to star in Yeh Rishta Kya Kehlata Hai after Mohsin Khan – Shivangi Joshi’s exit; Zeeshan Khan announces relationship with Reyhna Pandit and more

Bigg Boss 15 began on October 2 and fans are already loving this new season. Jay Bhanushali, Tejasswi Prakash, Vishal Kotian, Karan Kundrra, Akasa Singh, Afsana Khan, Sahil Shroff, Simba Nagpal, Vidhi Pandya, Umar Riaz, Donal Bisht, Ieshaan Sehgaal, Meisha Iyer, Pratik Sehajpal, Shamita Shetty and Nishant Bhat are the participants this year. In just the beginning we have already seen people age shaming, Body shaming, giving threats and what not. On the premiere episode, we saw Ieshsaan Sehgaal and Umar Riaz’s fights which continued till they entered the house. Pratik and Umar also had a fight on the first day itself. We also saw a big fight between Jay Bhanushali and Pratik Sehajpal which resulted in the Bigg Boss property damage. The house is divided in two groups. The Bigg Boss OTT contestants stay in the main house while the others are junglewassis. The house is owned by the OTT contestants and they are the one ruling the junglewassis. The junglewassis get a chance to enter the house through a few task. The first task happened this week where we saw Karan Kundrra being the star of the game. However, he also was slammed for calling Shamita ‘aunty’. We also saw Ieshaan Sehgaal and Miesha Iyer getting close. Also Read – RIP Arvind Trivedi: Ramayan’s Ravan and 7 more actors from the epic TV show who have passed away

It has been more than a month to Sidharth Shukla’s demise and we are still unable to believe that he is no more with us. Fans are still depressed about that sad incident that took place. This news broke Shehnaaz Gill and she is still not able to come to terms with the fact that Sidharth is not going to be with us. Now, after almost a month finally stepped out of her house to fulfill her prior work commitments. She has resumed her work for her film, Honsla Rakh with Diljit Dosanjh. It was earlier reported by Bombay Times that Shehnaaz will return to work on October 7 and as per reports on social media, Shehnaaz left for her film’s shoot and travelled to an international location. With this news doing rounds, fans had shown their support for Shehnaaz and have encouraged her to do her work. One of her reel from the promotions of the film has also gone viral. Also Read – RIP Arvind Trivedi: Ramayan’s Ram Arun Govil, Sita Dipika Chikhlia, Lakshman Sunil Lahiri pay heartfelt tribute to Raavan

It has been earlier reported that Mohsin Khan and Shivangi Joshi would be leaving Yeh Rishta Kya Kehlata Hai. If reports are true it would be their last day today (October 8). Recently, Pranali Rathod confirmed that she has been approached for the lead role in Yeh Rishta Kya Kehlata Hai. In an interview with India Forums, she said, “Yes I have been approached for the show but nothing is confirmed yet.” Pranali has impressed the audience with her performance as Saudamini in Barrister Babu and as Suman in Jaat Na Poocho Prem Ki. It is being said that she might play the role of Akshara or Aarohi in the show. Fans have been waiting to know who would be the male lead of the show. As per reports on social media, Harshad Chopda has been approached to play the male lead of the show. Several posts on social media say that he will be playing the role of Kartik and Naira’s son, Kairav. Fans have been waiting to see him on the small screen for a very long time. Ever since this news has been doing rounds on the internet, fans are tweeting about Harshad and congratulating him for bagging the role.

Taarak Mehta Ka Ooltah Chashmah’s Nattu Kaka aka Ghanashyam Nayak passed away on Sunday (3rd October) after battling cancer for a long time. And the news of his demise has shocked each and everyone, right from the fans and his colleagues from the sets of TMKOC. On Monday, his last rites were performed in the city. And deets of the same have been shared by Gogi aka Samay Shah from the show. It’s truly heartbreaking. Samay told Etimes that Nattu Kaka aka Ghanashyam Nayak shared his last wish which was about his cremation. Talking about his bond Samay revealed that Nayak was the most fun person to be around. He recalled how the senior actor would often go for walk during the breaks. He shared how during the night time when they did not have any scenes, they would go for walk in the film city. Ghanashyam would also share stories from his struggling days as to how he would work for Rs 2 or Rs 5. He was a very passionate person and he had only one desire in life that he would like to die with makeup on. His son fulfilled his wish and called a makeup person to do it,” Samay told the portal. When the late senior actor was hospitalised, Samay revealed that they all were planning on meeting him. However, Nayak did not want to meet anyone.

TV actor Zeesha Khan, who recently garnered popularity with his stint in Karan Johar’s Bigg Boss OTT, has made his relationship official with Reyhna Pandit by posting an intimate pic, where the duo is sharing a sweet kiss. The actor wrote in an elaborate post, ”From my bestfriend to being the love of my life, from my happiness to being my peace of mind! You are everything i wished for and more! Each second i spend with you, every breath i take in your presence fills my heart with a love that’s only described in fairytales!”He added, “And yes i know there are people who have their doubts and feel this sort of love cant be true, but hey people usually dont believe what they think they cant have! And i wish everyone feels the love we do, coz somethin soo magical is nothing less than a fairytale! ‘YOU ARE MY GIRL AND IMMA TELL THE WHOLE WIDE WORLD, TELL EVERYBODY THAT YOURE MYYYYYYY GIRL! I LOVE YOU BABY BUNS!”.

Kuch Rang Pyaar Ke Aise Bhi 3 is hardly a success compared to the first or second season. Now, rumours are coming that Erica Fernandes is planning to quit the show. The show was about Dev (Shaheer Sheikh) and Sonakshi (Erica Fernandes) finding out that Suhana is not their biological child. They bring Ayush home, who is their first son. This impacts the relationship of the couple as they struggle between managing work, home and conflicted emotions. The new track on the show is the arrival of a new member that has further complicated the situation. We have seen the entry of Sana Amin Sheikh on the show. The radio host and actress is playing the role of Suhana’s aunt. Ever since her entry, there has been a lot of focus on Sanjana. This has kind of altered the storyline. A source has told SpotboyE that Erica Fernandes is upset with her character development and overall trajectory of the show. Well, the writing seems to be inconsistent this season. This has been noticed even by viewers of the show. On the show, Erica plays the role of Dr Sonakshi Bose who is an opinionated woman managing both a home and a job in a traditional family.

Khatron Ke Khiladi 11 ended recently and now one of the friendships that happened through this show also ended. Yes, we are talking about Sana Makbul and Rahul Vaidya. Recently, we saw Rahul Vaidya unfollowing Sana Makbul on Instagram. Now, in an interview with RJ Sidharth Kanan, Sana opened up about her falling out with co-contestant Rahul Vaidya, and why she does not want to speak with him again. She revealed that their friendship was affected when their fans began arguing with each other on social media. She said that Rahul was a dear friend and around the time the first episode of Khatron Ke Khiladi was aired, someone made a comment on Twitter about her acing a stunt. Sana shared that she posts swimwear pictures, but has never received a negative comment. But suddenly someone commented on her wall about Rahul and XYZ party are fighting and she was caught in the middle. She had liked all the comments to make fans feel like she’s paying attention. Sana explained, “Me liking and retweeting that tweet was supposed to mean, ‘Haha, they didn’t think this girl could do it, and she did it’. So it wasn’t a direct thing to Rahul or anyone. And this was how it began.” Sana Makbul then shared that RKV fans were then abusing her but Rahul Vaidya was quite sweet and even messaged her and she told him to ignore it. Later after 15 days, Sana noticed that Rahul had unfollowed her on Instagram and she asked him the reason for it. Rahul told her that it was because she had liked and retweeted that tweet. Sana told him it wasn’t for him and why is it affecting him. Sana revealed that she tried having a conversation with Rahul, but realised that if their bond could be reduced to this, then she was better off not engaging with him. She called Rahul petty and kiddish and feels that she can never talk to him again.