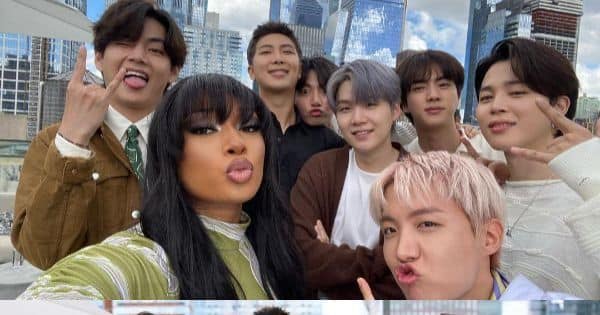 BTS released the remix version of Butter with the Grammy-Award winning rapper Megan Thee Stallion. BTS’ label BIGHIT Music had shared this big news on Weverse app with a statement, that reads, “‘Butter’ (feat. Megan Thee Stallion) features the inimitable rap, signature sounds and ad-libbing of three-time Grammy Award-winner Megan Thee Stallion with the exceptional personality of BTS showcased in the original song to create an even richer experience for all listeners.” Post that BTS met Megan Thee Stallion at her label Roc Nation‘s New York office. After their first in-person meet, BTS members revealed how their first in-person interaction with her went. It seems like it was a surprise for them after meeting her. Also Read – My Universe: BTS and Coldplay pose together ahead of their song’s release; Bangtan Boys come up with a special gift for the rock band

They said that Megan was tall and they didn’t see that coming. The BTS members think she is around 176.5 cm (5’7″), while Megan
previously claimed she’s closer to around 177.8 cm (5’10”). With this, we can say she is taller than the BTS members and also wore a pair of heels when she met them. They also said that she has a very kind and down-to-earth personality. They also met her adorable french bulldog by the name of 4oe and he has over 500K Instagram followers. V said that none of the BTS members could even reach the number of followers 4oe have. Interestingly, before releasing the Butter remix with BTS, Megan headed to court as her recording label was preventing her from releasing the single. She shared a petition seeking an “emergency relief from the Court before this Friday, August 27, 2021, to allow her new music to be released this week as previously-scheduled.” Also Read – BTS’ Kim Taehyung captures the imagination of the art world with murals, sculptures and graffiti capturing his angelic looks — read deets

The document further reads, “If Pete (Megan Pete is rapper’s birth name) is not allowed to release a new track this Friday on which she is the featured artist in a remix with BTS of the song called, ‘Butter,’ her music career will suffer irreparable damage, including a devastating impact to her relationships with her fans and with other recording artists in the music industry.” Also Read – Trending Hollywood news today: ARMY showers love on BTS’ Jimin for secret donation, Sex and the City actor Willie Garson dies at 57 and more