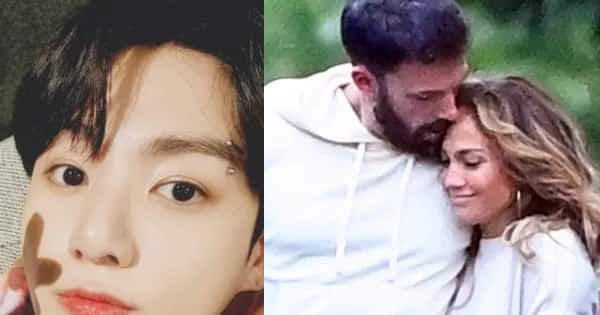 As the day comes to an end, let’s take a look at some of the newsmakers from Hollywood. Among those who trended the most, we have BTS member Jungkook who grabbed everyone’s attention by flirting with a fan. Next, as Ben Affleck’s film The Last Duel hit the theatres, girlfriend Jennifer Lopez showered him with praises. Read on for more. Also Read – Ryan Reynolds, Chris Evans, Ben Affleck, Halle Berry and more Hollywood stars who’ve played two superheroes on screen – view pics

A video of Jungkook from his birthday live session with ARMY has gone viral on social media. In the video, we see him flirting with a fan when she comments that her mother considers him to be his son in-law. He stared at the screen for a bit but then replied saying, “A handsome son-in-law?” Also Read – Trending Hollywood news today: BTS wins big at MTV VMAs, Britney Spears gets engaged, Gwyneth Paltrow reacts to ex Ben Affleck and Jennifer Lopez’s love and more

On Instagram, JLo posted a video from Venice premiere of Ben Affleck’s film The Last Duel and appreciated the team’s efforts. She wrote, “Throwback to the Venice Film Festival for the premiere of #TheLastDuel✨ I had such a beautiful time!! And I’m so excited for you guys to see this movie!! It’s the first script Matt and Ben have written together along with Nicole Holofcener since Good Will Hunting!! And it’s amazing!! The acting by the whole cast is fantastic. Jodie Comer plays the lead and she is awesome!!! It was a magical trip and I hope you enjoy the pics!!

On Instagram, Kourtney Kardashian made a post that left everyone laughing hard. She shared a stunning picture of her and then that of a her and Travis Barker’s picture covered with face masks.

As Nick Jonas turns a year older, Priyanka Chopra made a mushy post on social media. Sharing a picture she called him the love of her life.