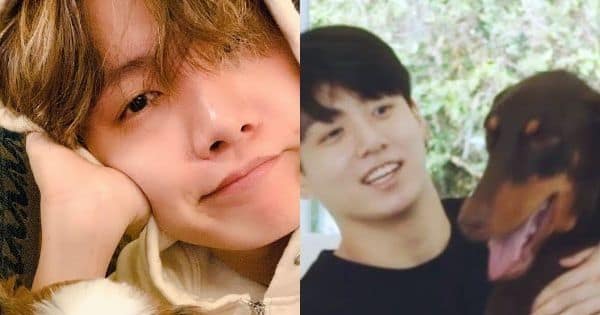 BTS‘s reality show BTS In the SOOP 2 was telecasted last week wherein Jungkook‘s dog Bam made a special appearance. The Bangatan boys were enjoying their dinner together when Jungkook returned from feeding Bam his dinner. The handsome boy brought his pet along with him to the dinner. The BTS members teased him and were happy to see Bam. Also Read – Hollywood News Weekly Rewind: BTS’ Jungkook, J-Hope, RM and SUGA aren’t Squid Game fans, Gwyneth Paltrow’s sex advice for her teenage kids and more

Jungkook’s pet Bam was seen running around the area and was quite happy to be with the BTS members. Seeing Bam happy, the BTS members got emotional as they were missing their own pets back. J-Hope said, ‘Pet dogs and cats, or all things have a stage when they’re so adorable, but it’s heartbreaking to watch them get old.’ Jin then helped everyone lighten the mood as he teased J-Hope that he must be at his prime now as he is cuter than ever. Also Read – BTS: The Bangtan Boys REACT to Lizzo’s Butter cover in the most adorable manner – deets inside

Later, V asked J-Hope about his pet dog, Mickey. J-Hope said that Mickey cannot see now. J-Hope was reminded of how difficult it was when Jin’s dog Jjangu passed away in 2017. He said, ‘I remember it exactly. At the ‘MIC Drop’ recording… You cried so much.’ BTS remembers how Jin could not stop crying after hearing the news of his dog passing away. The group remembered the difficult time Jin went through. After thinking about his own dog, Jin went to play with his nephew Bam. Also Read – Trending Hollywood news today: BTS’ RM fulfills Jungkook’s wish, Kylie Jenner shows off baby bump in naked shadow picture and more