Did Ieshaan Sehgaal just admit he FAKED love with Miesha Iyer to stay in limelight on Salman Khan’s show? 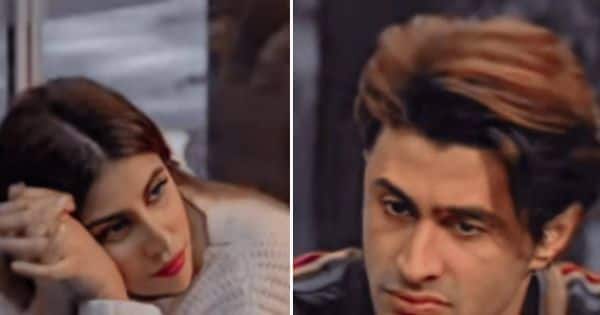 Did Ieshaan Sehgaal just admit he FAKED love with Miesha Iyer to stay in limelight on Salman Khan’s show?

The first wild card entry of Salman Khan’s Bigg Boss 15, Rajiv Adatia, is in the house and things are just about to go wild. He is a past connection of both Shamita Shetty and Ieshaan Sehgaal. While he is Shamita and Shilpa Shetty’s Rakhi brother, Rajiv and Ieshaan are said to have been in a relationship in the past. And now that he is inside the house, the dynamics between Ieshaan and Miesha Iyer might change for the worse. But that’s not all, Rajiv may just make Ieshaan lose all the brownie points he may have collected from the audience due to his love angle with Miesha. Also Read – Bigg Boss 15: EXPLOSIVE – Rajiv Adatia and Ieshan Sehgaal were in a relationship? New wild card entry to turn BAD NEWS for Miesha Iyer?

In the latest promo of Bigg Boss 15, Ieshaan and Rajiv indulge hush-hush banter when Rajiv tells Ieshaan, “I know you so well, I don’t believe in your teen din a pyaar vyaar and all.” Ieshaan in his defence tells Rajiv that he was desperate to keep staying on the show and do whatever it takes to be in the limelight and have audiences’ attention. And bang! With that, Ieshaan has indirectly admitted that his love for Miesha was all fake and just for the show. Also Read – Bigg Boss 15: From Karan Kundrra’s towel comment on Donal Bisht to Ieshaan Sehgaal-Miesha Iyer’s PDA – 5 instances that made us go Yuck!

In fact, Rajiv told him how his ‘I love you’ and all the coochie-cooing is being dissed outside and has in fact just achieved the opposite of what Ieshaan was looking for. And the is just the start. Rajiv has only entered the show now. With what we have seen so far, he comes loaded with secrets and with a ‘I will not mince my words’ badass attitude. We can expect may shockers and surprises in Bigg Boss 15.
It now remains to be seen how Ieshaan changes his bonding with Miesha, after the grilling session with Rajiv. Furthermore, it will be more interesting to see Miesha’s reaction to the changed behaviour. Bigg Boss 15 fans have some exciting days ahead of them as Rajiv Adatia is sure to ignite some fires in the wild. Also Read – Bigg Boss 15: Do you think Vishal Kotian is using Shamita Shetty for the game? Vote now