Did Suriya take inspiration from real Justice Chandru to portray a crusading lawyer? The actor spills the beans [EXCLUSIVE] 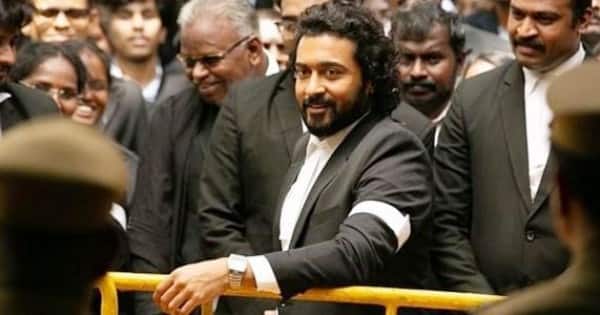 Did Suriya take inspiration from real Justice Chandru to portray a crusading lawyer? The actor spills the beans [EXCLUSIVE]

The trailer of Suriya starrer Jai Bhim was recently dropped by the makers and the hard-hitting and powerful promo gave us several goosebumps moments. The film is adapted from a case led by Chandru to bring justice to an Irular tribe woman in 1995. While the actor stepped into the shoes of Justice Chandru, the Soorarai Pottru star never tried to copy his nuances or actions while portraying any courtroom drama scene as Suriya said that he and Chandru are two different personalities. Also Read – Mahesh Babu to make cameo in Krishnamma Kalipindi Iddarini

It’s time to show the power of truth and faith!!

Talking to FilmDhamaka, the actor-producer said, “We didn’t do that. We look very different from each other like Chandru sir’s real appearance and how I look is totally very different. We just took his attitude. The way he speaks, the way he quotes things and the way he behaves and he’s got a little one small tip of anger in him to what is right and how he does things and how he behaves at home and how was the attire. Small small things whatever I have picked from his books and whatever I could interact and understand from him. That’s what I was able to do. But appearance wise, looks wise and so many things we are very very different from each other.” Well, the trailer looked promising and we are sure that this film will definitely make people think about the society we live in. Also Read – Madhu Maadhu Soodhu: Bar refurbished at Rs 50 lakh for this Tamil suspense-thriller

Written and directed by TJ Gnanavel, the film also features Prakash Raj, Manikandan, Lijomol Jose and Rajisha Vijayan in pivotal roles. The music of Jai Bhim is composed by Sean Roldan with S.R. Kathir and Philomin Raj taking care of the cinematography and editing department. The film is bankrolled by Suriya under his banner 2D Entertainment. It is set to premiere on Amazon Prime Video on November 2. So, are you excited for this venture? Tweet to us @bollywood_life.