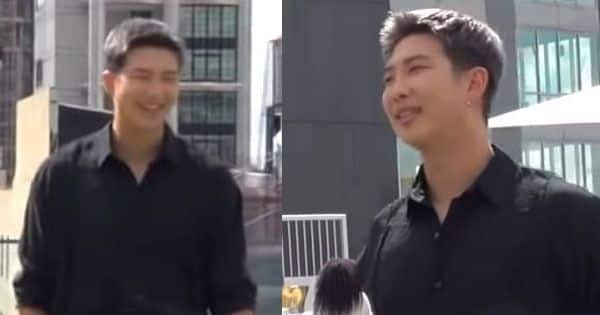 BTS has released the adorable video where the boys met Megan Thee Stallion in the US. It is a very wholesome video. We can see the admiration that BTS has Megan and vice versa. The video has a couple of scene-stealers. One of them is Megan’s pet French bulldog 4oe. From Jimin to SUGA, everyone fell in love with the canine. ARMYs can see how lovingly SUGA and V picked up 4oe in their arms to shower it with all their love in a short period. The pet reacted instantly to Kim Taehyung who is a huge dog lover and a proud pet parent too. Jungkook was also seen gushing over him. Also Read – Wow! Miss Global Korea chooses THIS BTS member as her ideal man! Any guesses?

The one moment has been the one where RM gets up to greet Megan Thee Stallion. Dressed in black pants and matching formal shirt, he looked handsome. Fans cannot get over his effortless swag and how nicely he greeted Megan who also greeted him in a very excited manner. RM has been working out and his buffed up avatar has impressed many. Just check out some of the thirst tweets that will make you drool a little more on this Namjoon… Also Read – BTS: When the Bangtan Boys were trolled for lip-syncing at a concert but Suga shut them down with a lot of SWAG – watch video

I bet this namjoon bias wrecked all of you?#namjoon #RM #BTS pic.twitter.com/gGJUrCrDcn

Remember when namjoon wrote ‘I am a dangerous guy ‘ in his diary ??
He was right , indeed INDEED …#KimNamjoon #namjoon #BTS pic.twitter.com/TqfH9OjQ0B

Excuse me Namjoonshii why u look so yummy n sexy? Are u trying to slay all the ARMY ? ???#RM @BTS_twt #namjoon #BTSARMY https://t.co/DGKsHtfLZz

We can see that RM’s look has created quite a stir. The young man looks really good in black and white. Megan Thee Stallion has said that she would love more collaborations with BTS and this they did shoot an epic video! Also Read – BTS’ J-Hope once took an NYPD officer’s breath away with his killer looks and ARMY can relate to this – watch video

READ ALSO |  Trending Hollywood news today: BTS gets nominated for American Music Awards for the 4th time, Gwyneth Paltrow shares she f**cks up parenthood all the time and more