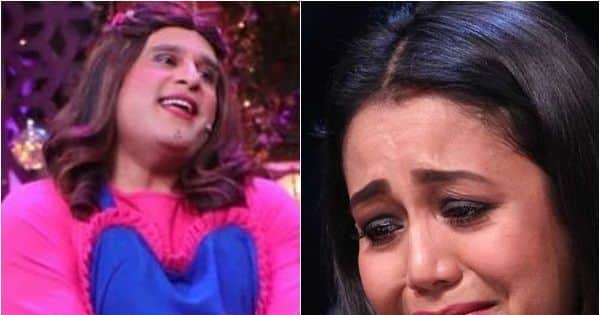 Neha Kakkar is known to be an emotional personality. We have seen her break down quite often on reality shows. She gets brutally trolled on social media every now and then and becomes fodder for memes and jokes. And now Krushna Abhishek took a dig at Neha for shedding tears every time she listens to sob stories of the show’s contestants. Also Read – The Kapil Sharma Show: Kapil Sharma’s comedy show lands in trouble; FIR filed over showing alcohol in a courtroom set

As siblings Neha Kakkar and Tony Kakkar visited The Kapil Sharma Show to promote their new single, Kaanta Laga, Krushna Abhishek came dressed as Sapna to share her sob story with the two. “Mereko na bohot dukh hai, mereko koi pyaar nahi karta hai (I am very sad because no one loves me),” Krushna expressed his sorrow. When an empathetic Neha asked why, Krushna went on to take a dig at her saying, “Aap rona nahi, haan, main contestant nahi hoon (Don’t cry, I am not a contestant).” Neha pretended to be upset and retorted, “Maarungi (I will hit you).” Also Read – Trending TV News Today: Pawandeep Rajan-Arunita Kanjilal’s unreleased song gets leaked, Indian Idol 12’s Sayli Kamble reveals she is in love and more

Kapil also joked about how the Kakkar siblings, Neha, Tony and Sonu, have been appearing on almost every TV show. He asked them sarcastically if they are fully vaccinated or they like being offered a discount package deal to appear on television. Also Read – The Kapil Sharma Show: Get ready to relive moments from Indian Idol 12 as Neha Kakkar, Pawandeep Rajan, Arunita Kanjilal, Mohammad Danish and others reunite for a perfect musical night on Sunday – view pics

The episode also saw Indian Idol 12 winner Pawandeep Rajan, first runner-up Arunita Kanjilal, Shanmukhapriya and Nihal Tauro on the comedy show. They also performed on the stage leaving Kapil Sharma and the audience in awe of their singing skills.