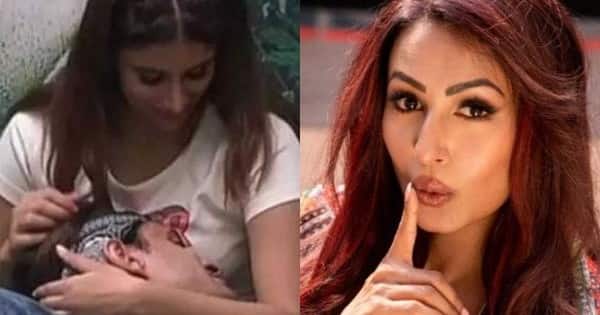 Bigg Boss 15 is making headlines and how! Apart from the age-shaming, body-shaming and new lows of people (Pratik Sehajpal) breaking into a locked bathroom when a woman (Vidhi Pandya) is taking a shower, there is also huge buzz around Ieshaan Sehgaal and Miesha Iyer’s love angle. The two have been doing ample PDA inside the show, kissing, caressing each other, sneaking into dark corners and we don’t know what more is instore. However, most people watching the show are having a hard time getting convinced about this romance being real. Now, ex Bigg Boss contestant Kashmera Shah has expressed her expert opinion about this love angle. In a tweet, Kashmera said, “Sometimes love just happens. I know it seems fast and unreal but why am I liking #IeshaanSehgaal so much. The way he talks to Miesha and promises her not lose his cool is just awesome. I see real love in his eyes for her. I am unsure about Miesha still.” The actress found Ieshaan genuine while had her doubts about how exactly Miesha feels. Also Read – Bigg Boss 15: Karan Kundrra likes Shamita Shetty? Tejasswi Prakash drops a hint; Raqesh Bapat are you listening?

Sometimes love just happens. I know it seems fast and unreal but why am I liking #IeshaanSehgaal so much. They way he talks to #meisha and promises her not lose his cool is just awesome. I see real love in his eyes for her. I am unsure about #meisha still @BiggBoss @ColorsTV

Interestingly, Bigg Boss 15 current contestants who are seeing this love story up, close and personal have also raised doubts about it. Jay Bhanushali said, “humko laga dhai mahine mein hoga, yeh log dhai din mein shuru ho gaye.” This hinted at how it was too soon to fall so madly in love with each other. Umar Riaz, who shares cold vibes with Ieshaan from the premiere night itself, said, “Miesha is playing a game with Ieshaan,” clearly doubting her intentions. Another ex Bigg Boss contestant, Andy Kumar, who has strong opinions about everything in Bigg Boss, every season, also accused Miesha of playing a game while Ieshaan was like a ‘lost puppy’.
So clearly, people are finding Ieshaan believable but have doubts about Miesha and what’s on her mind. Well, only time will tell how this relationship pans out. Real or Fake, we will know in time, for sure. Also Read – Bigg Boss 15: Pratik Sehajpal’s OTT connection Neha Bhasin feels he is being ‘bullied’; says ‘one against 13 people is a little unfair’