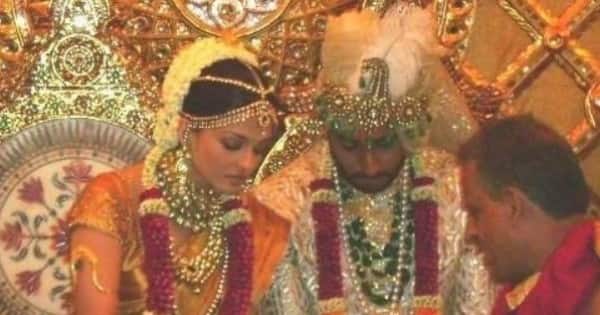 Recently, a netizen posted a morphed picture of Aishwarya Rai Bachchan and Abhishek Bachchan from their wedding day on Twitter. In the picture, we see Abhishek and Aishwarya dressed in a wedding ensemble. The couple got married in 2007 and are parents to a nine-year-old daughter named Aaradhya. The picture grabbed attention as they flashed their million-dollar smiles for the shutterbugs. Also Read – From Akshay Kumar, Shilpa Shetty Kundra to Deepika Padukone: 8 Bollywood celebs who don’t drink

The post was captioned as ”Her laugh n his Smile say it all #MyLovelies #AbhishekBachchan #AishwaryaRaiBachchan #TBThursday”. Also Read – Throwback to when Russell Peters called Aishwarya Rai Bachchan ‘the biggest example of bad acting’

Actor Abhishek was quick enough to reveal that the picture was fake. He replied to the tweet and said, ”This is a photoshopped image” with folding hands emoji.

Abhishek and Aishwarya fell in love during the shoot of Umrao Jaan. The couple got married in a private ceremony at the Bachchans’ bungalow, Prateeksha.

On the work front, Abhishek recently got injured while shooting in Chennai while shooting for an intense sequence. The actor will be next seen in Dasvi with Yami Gautam and Nimrat Kaur. He will be seen next in a Kahaani spin-off titled Bob Biswas where he will essay the lead role of an insurance agent.

READ ALSO |  Shah Rukh Khan to give Rajkumar Hirani the BIGGEST flop of his career? This viral meme suggests so

Abhishek was last seen in The Big Bull which is loosely based on stockbroker Harshad Mehta and was released on Disney+ Hotstar. Meanwhile, Aishwarya will be seen in Ponniyin Selvan which is directed by Mani Ratnam. The film will also star Vikram, Karthi, Trisha Krishnan, Prakash Raj, Jayam Ravi, and Aishwarya Lekshmi, among others.