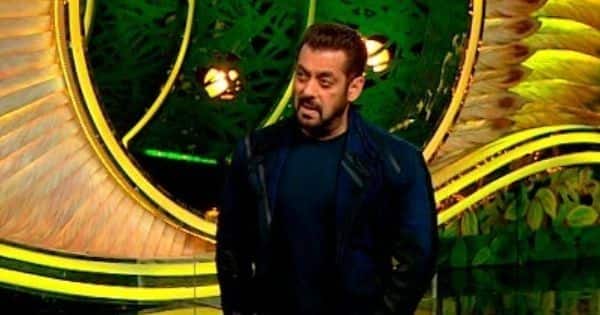 This week of Bigg Boss 15 has witnessed many moments filled with drama where contestants have tried to demonstrate their power in the ‘BIGG BOSS’ jungle. However, it was the Weekend Ka Vaar today and as usual Salman Khan left us surprised with his hosting. Today’s weekend ka vaar topics were the aggressions the contestant show during the tasks and Afsana Khan’s dirty behaviour. He first made everyone calmly understand that physical violence will hurt them itself and that the show is not about violence. He told everyone to be careful as almost everyone was injured during the zeher ka keher task. Also, with dignity, he explained Ieshaan Sehgaal and Miesha Iyer not to do such things on national television that will harm their image later. Also Read – Bigg Boss 15, Weekend Ka Vaar, Live Updates: Salman Khan schools Afsana Khan for her abusive behaviour; takes up Jay Bhanushali-Pratik Sehajpal’s topic

Salman Khan asked Jay Bhanushali to use words carefully. He then took up Afsana’s topic. Afsana has fought many of her fellow contestants this week and said some things that were not right. Furious with her behaviour, Salman Khan said, “Main aapko sunvaata hoon ki aapne kya-kya bola!” He then reminds her of how she used the word ‘ghatiya aurat’ during her fight with Shamita. “Aap decide karengi ki ghatiya kaun hai?”, he thunders. Becoming red-faced in front of Salman, Afsana uses her only defense as she says, “Gusse mein thi sir”. He also reminds her that she disrespected the gay community and asks to apologise. He made Afsana understand that it was wrong that she hurt so many people as well as herself. In the end, we also saw him making her sing and laugh. Fans have loved this behaviour of Salman Khan and they way he handled all the topics with dignity. Fans say that no one can host better than him. Take a look: Also Read – Trending TV News Today: FIR filed against Rahul Vaidya-Bhoomi Trivedi, Madhurima Tuli on her ‘ugly’ past with Vishal Aditya Singh and more

No one i REPEAT No one can Host Better than SALMAN KHAN that’s it. #WeekendKaVaar #SalmanKhan @BiggBoss

That’s all it takes & he needed it.
Very nice advice given by #SalmanKhan to #PratikSehajpal .It was a +ive one! He is one of the strongest contestant in the show & shouldn’t indulge in activities which can go terribly against him. So proud of u boy
Onwards & upwards#BiggBoss15 https://t.co/AEnDSBF9dg

Glad that #salmankhan pointed out that most of them are looking fake, that’s why I’m unable to connect to anyone that much this time,remember #biggboss15 is a personality show, yet as of now most contestants are trying to look like someone or the other n not being realself #BB15

I repeat no can host better than #SalmanKhan ever ??#BB15 #BiggBoss15#WeekendKaVaar

#Salmankhan you really did the duty of bhai (brother) in real sense.#AfsanaKhan ab thoda control karo apne aap pe. You real have a touching voice#Biggboss15 #NishantBhat

The way #SalmanKhan guide #AfsanaKhan I wish she understand very politely he told what she is doing is not good. I hope she control her agression. But i have gut feeling she will do same again. Selfharmng oh GOD? #BiggBoss15 #BiggBoss #WeekendKaVaar #BB15 #BiggBoss15OnVoot

READ ALSO |  Do you feel Raqesh Bapat’s equation with Shamita Shetty meant that he was saved and Neha Bhasin was eliminated? Vote now