Not Kareena Kapoor Khan, Saif Ali Khan or Taimur, Jeh resembles THIS family member and we got PROOF – view here 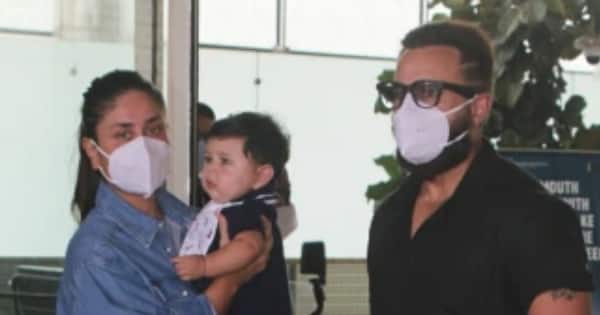 Not Kareena Kapoor Khan, Saif Ali Khan or Taimur, Jeh resembles THIS family member and we got PROOF – view here

Kareena Kapoor Khan gave birth to her second baby boy in the month of February this year. However, unlike Taimur Ali Khan, she kept her baby no 2 away from the media glare for quite sometime. In fact, it was recently that Kareena and Saif revealed the name of their baby. They named him Jeh which is said to be the short form of Jehangir. Now, Kareena is treating her fans with pictures of baby Jeh. Taking to Instagram, she shared a very adorable picture of Jeh and called him Forever Mood. And now another picture of him has hit the internet, courtesy aunt Saba Ali Khan Pataudi. Also Read – Kareena Kapoor Khan, Saif Ali Khan paint a perfect family picture with Taimur and baby Jeh as they head for another fam vacay – view pics

Aunt Saba feels that baby Jeh looks like her. She shared a picture on her Instagram account that is a collage of her childhood picture and the recent picture of Jeh. Giving the exact same pose, it seems that Jeh shares a striking resemblance with his aunt. Saba on her Instagram account wrote, “My JAaN…..! ? Jeh Jaan…. and moi . Do we resemblance each other? ? Definitely.. clicked alike know! ?” Not just Saba, we are also convinced that Jeh has features like that of his aunt. Take a look at the picture below: Also Read – Kareena Kapoor Khan, Taimur get trolled, netizen says, ‘this child needs to be taught to respect elders’ – watch

Meanwhile, Kareena, Saif Ali Khan, Taimur and Jeh are enjoying their vacation at an exotic location. She has been treating her fans with some amazing pictures through social media. She had recently shared a picture of Taimur and Saif having an adventure-filled time on the island. Also Read – Kareena Kapoor Khan’s awww-some clicks with her little cub Jeh are cuteness personified – view here

On the work front, Kareena Kapoor Khan will be next seen in Aamir Khan’s Laal Singh Chaddha. She also has Veere Di Wedding 2 on cards but nothing has been confirmed as yet.