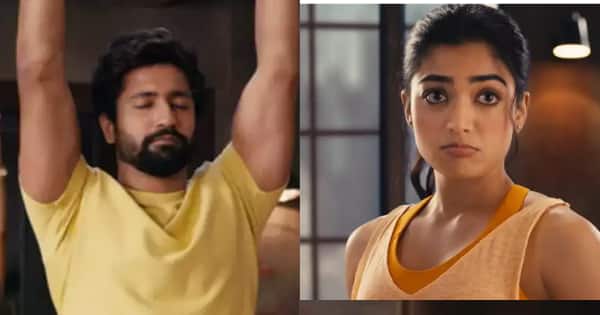 Karnataka crush Rashmika Mandanna has yet again grabbed headlines. And this time, the Geetha Govindam star is getting trolled for drolling over Vicky Kaushal’s underwear strap. Yeah, you read that right. Believe it or not, Vicky and Rashmika featured in a TVC recently which saw Rashmika apparently oogling over the Raazi actor’s underwear strap. And this did not go down well with the young belle’s fans. A lot of netizens have trolled Rashmika for doing the TVC. It was a TVC for an underwear brand. Also Read – Pushpa actress Rashmika Mandanna’s reaction to a marriage proposal will make you adore her chilled vibe

A lot of the Dear Comrade actress Rashmika Mandanna’s fans are have asked her to not be a part of such projects and instead take up decent projects. Some have claimed that by doing the TVC, she has disappointed a lot of her fans. “The advertisement of Amul Macho was TERRIBLE. These Cheap ads are not expected from you Geetha,” one of the Twitter users wrote. Another one said, “Nowadays what is going on with underwear advertisements. 1st Lux Cozi ad was making nonsense and discomfort on TV and now MACHO ad also going on the same path. What the hell is happening with the publicity team of underwear, deodorant companies.” Also Read – Mission Majnu jodi Sidharth Malhotra and Rashmika Mandanna pose for paparazzi; fans troll ‘Karnataka’s Crush’ for overacting – Watch

dear @iamRashmika i saw your ad #machosporto and its realy disappointed me, i never expected this from you , you can’t do this bcs you are a national crush and heart of millions, sorry if i said any wrong thing..
keep smiling and be happy

National crush of India Rashmika mandana with Vicky Kaushal in adv of Amul Macho.
Now don’t ask about the moral values,ethics,principles,etiquettes and upbringing,its all about money ?#woke_feminism #comouflage

Rashmika might like Vicky kaushal’s underwear band peeping out of his pants.
But believe me when I say this it’s just her preference.
Not applicable to general women crowd.

One of the cheapest ads I have seen in recent times…

I don’t think any gal will get so excited to see someone’s macho… https://t.co/GcOVdb4lDu

Talking about the TVC, Rashmika plays a Yoga trainer while Vicky Kaushal seems to be her pupil. She asks her pupils to stretch their hands towards the sky which leads to Vicky’s tee getting lifted up. A strap of Vicky’s Macho sporto underwear is seen and Rashmika who was counting starts staring at the strap. That’s not it, to get another peek at it, her character puts the Yoga mat on the top of a shelf. Check out the video here: Also Read – Rashmika Mandanna makes a shocking statement that ‘actresses need to do four movies compared to one done by top male stars’

On the work front, Vicky has Sardar Udham, Sam Bahadur, Mr Lele and more films in the pipeline. Rashmika, on the other hand, has Pushpa, Mission Manju and Goodbye to name a few.