Salman Khan requests the makers of the reality show to increase his pay! Here’s what he said 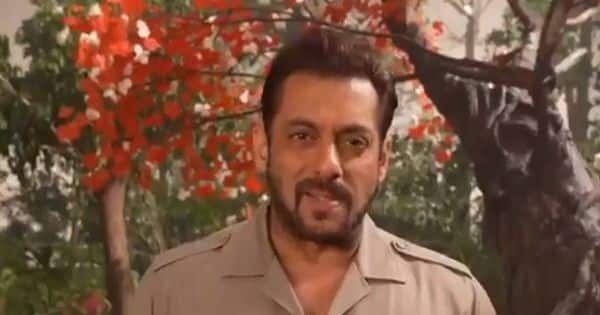 Salman Khan requests the makers of the reality show to increase his pay! Here’s what he said

After taking the audience on a rollercoaster ride with Bigg Boss OTT, Salman Khan is all set to take over the small screen with his controversial reality show Bigg Boss 15. The show was launched today at the Pench forest, Seoni, Madhya Pradesh wherein former Bigg Boss contestants Devoleena Bhattacharjee and Arti Singh participated in jungle activities and turned host for the night. Later, Salman Khan, who is currently busy shooting for Tiger 3 in Russia, joined the press meet through a video call and asked the makers of Bigg Boss 15 to increase his salary. Also Read – Bigg Boss 15: Devoleena Bhattacharjee and Arti Singh introduce the contestants who’ll be entering Salman Khan’s show; name 2 is from BBOTT [EXCLUSIVE VIDEO]

During the interaction, Salman was seen explaining to the makers why his remuneration should be raised. He reasoned that he also has kids and elderly people at home and he need to take care of their demands. He then went on to request to increase his pay and left everyone in splits. Also Read – Bigg Boss 15: Is this trilogy of skill, strength and smarts going to be the first task on Salman Khan’s reality show? – deets inside [EXCLUSIVE]

If the reports are to be believed, Salman has apparently charged Rs 350 crore for hosting Bigg Boss 15 for the duration of 14 weeks. The superstar was reportedly paid Rs 2.5 crore per episode from season 4 to season 6. His fee was doubled for season 7 and it was being reported that he had charged Rs 13 per episode for Bigg Boss 13. And this year, Salman will reportedly be charging close to Rs 25 crore per episode, which eventually makes him the highest paid host of any reality show. Also Read – Bigg Boss 9 fame Digangana Suryavanshi oozes oomph in latest photoshoot

Speaking about why Salman keeps coming back to Bigg Boss every year, he told the reporters, “I like Bigg Boss. I get to learn a lot from the show. Every time I lose my cool, I realise I shouldn’t have and then I work hard to improve myself. I don’t want to lecture or be biased, but I want to correct them when any contestant goes wrong. You get to meet and interact with 15 different contestants. Be it TV stars, commoners or other celebrities. So it’s fun.”