SAY WHAT! Kareena Kapoor receives a special, SURPRISE from Saif Ali Khan’s Adipurush costar Prabhas; is a collaboration on the cards? View pic 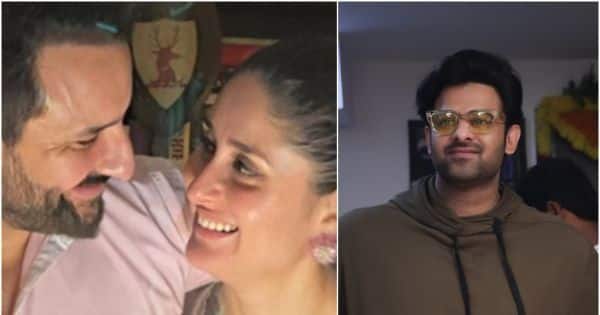 SAY WHAT! Kareena Kapoor receives a special, SURPRISE from Saif Ali Khan’s Adipurush costar Prabhas; is a collaboration on the cards? View pic

Who doesn’t love a plate o lip-smacking biryani. It’s quite literally the most loved dish across the country, with almost every state having its own iteration of it, so much so, it’s the one hardcore meat dish that even vegetarians love rehashing to claim that they’re having a veg biryani (nothing but a glorified beg pulao). And it looks like our movie stars, too, aren’t immune to the aromas, flavours, and wholesome goodness of a biryani, diets be damned. Kareena Kapoor, one of the fittest, most health-conscious Bollywood celebs has now given us a glimpse of that indulgence and willingness to cheat on your diet when it comes to biryani after her husband, Saif Ali Khan’s Adipurush costar, Prabhas, sent over huge containers of the delicacy to the couple’s abode. Also Read – From delivering more blockbusters to having a larger fan-base – 8 times Allu Arjun proved to be a much bigger star than Prabhas

Prabhas, who’s known to be complete foodie, decided to treat his Adipurush co-actor, Saif Ali Khan’s family, to a scrumptious biryani dinner, sending containers full of the dish. Overwhelmed by his gesture, Kareena Kapoor Khan took to her Instagram story to share a glimpse of one of the containers, and it looks so mouthwatering that we wish we could reach into the screen and grab some of it. Bebo captioned her post: “When Bahubali sends you biryani it’s gotta be the best. Thank you Prabhas for this insane meal. #Adipurush ,” along with a heart emoji. Check out the pic below: Also Read – WORRIED over Prabhas’ weight gain and aged look; Adipurush director Om Raut CONVINCES actor to take extreme steps to get back in shape

Prabhas will be seen as a version of Lord Ram in Adipurush, his leading lady, Kriti Sanon, essays a character inspired by Sita, Sunny Singh plays a role based on Lakshman, while Saif Ali Khan portrays the antagonist Lankesh, inspired by demon king of Lanka, Raavan.