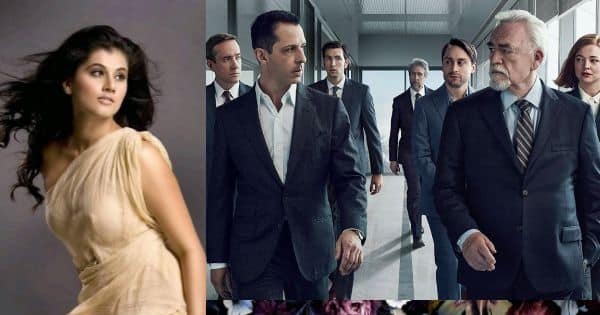 We’re always looking for exciting new titled to binge watch on OTT platforms even now that things have all but returned to normalcy in the country and lockdown is steadily dwindling away. To that effect, the urge to binge-watch becomes all the more exciting when it’s one of our favourite Bollywood celebrities recommending something right? In order to satiate the urge, FilmDhamaka recently got in touch with Taapsee Pannu to exclusively find out what her binge-watch list is, which she’d like to recommend to her fans, and she has some terrific picks for y’all. Also Read – From Sacred Games to Tandav: 7 OTT web shows and films that faced people’s ire

Naming the web series she binged on and enjoyed during lockdown, Taapsee Pannu said, “I didn’t binge-watch that much in the second lockdown as I did in the first. In the first, I saw Schitt’s Creek (Netflix), I saw Succession (Disney+ Hotstar)… actually, in the second one I saw Bombay Begums. So, there are like the ones on the top of my head that I can remember.” Also Read – Bombay Begums: Netflix directed to stop streaming after NCPCR raises objections — here’s why

The actress also offered some clarity about when her next movie after Rashmi Rocket, Looop Lapeta, could be expected. “Clarity toj mujhe 100% abhi bhi hur ek film ki nahi, par itna pata hai ki iske baad Loop Lapeta aani chahiye… issi saal, hopefully. (I still don’t have a 100% clarity about each and every film of mine, but I know this much that Looop Lapeta should arrive after Rashmi Rocket, hopefully this year itself.),” she added. Also Read – Bombay Begums trailer: Pooja Bhatt, Shahana Goswami, Plabita Borthakur and others portray the harsh reality of what it takes for women to survive in Mumbai

Opening up on why there has been no announcements yet on the releases of her films in future, Taapsee hinted, “Kya aapne woh raabit aur tortoise ki race ki kaahani suni hai? Bas woh yaad rakhna. (Have you heard that story of a race between the rabbit and tortoise? Just remember that.)”

READ ALSO |  Shaken by House of Secrets? Here are the most riveting documentary series to watch on Netflix, ZEE5 and Disney+Hotstar

So, are you going to check out the web series Taapsee Pannu has recommended. Tweet and let