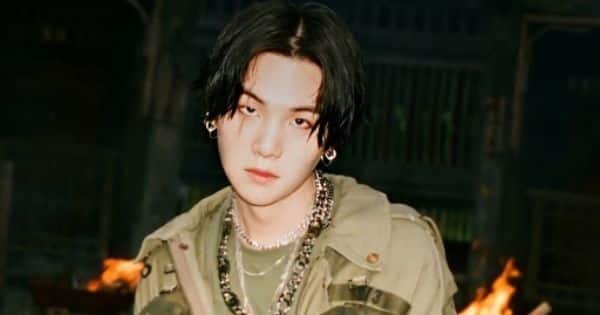 Suga fans have another reason to rejoice as his song Daechwita, which was released in May of last year, crossed 300 million views on YouTube. We can see Suga raping in the song which uses traditional Korean instruments. Also Read – BTS: As SUGA’s Daechwita crosses 300 million views on YouTube, here’s a look at times when he proved that he’s the King Of Bling — view pics

This track is a part of Suga’s second mixtape, D-2 and was released under the name of Agust D. It can be recalled that BTS members performed Daechwita together during their BTS 2021 Muster Sowoozoo, back in June. Also Read – Trending Hollywood news today: BTS’ RM reveals what happens when he rides a bike gifted by Jin, Bella Hadid makes sweet birthday post for niece and more

A few months ago, Suga recalled an interesting incident about his birthday that many might not be aware of. In an interview with Tokopedia, Suga revealed that his most special birthday happened right after BTS’ debut in 2013. He said that it was one of their first trips to another country and the departure date happened to be March 9, which is Suga’s birthday. Also Read – Here’s what happens each time BTS’ RM rides a bicycle gifted to him by Jin and it’s hilarious AF

As they flew off to another country, it was still March 9 because of the time zone difference. “A day passed but it was still March 9th!” Suga recalled. So he got to experience his birthday in two different countries that lasted twice as long. Now, isn’t that really cool?

Meanwhile, Jihoon, a former trainee with Big Hit Entertainment, recently shared a story about Suga that will make you emotional. The story is from 2011. He recalled that after the daytime training, J-Hope gathered all the trainees and offered them gwamegi, a dish made by his mother. All was well until they went off to sleep. Jihoon fell sick post midnight and he started throwing up. He felt dizzy and nauseous and it was Suga came to check on him. That was not all. Suga took Jihoon to emergency hospital and made sure that he got the necessary treatment. He even stayed that all night by his side. Later, Suga also payed Jihoon hospital bills as he had forgotten his card and wallet in the dorm. Jihoon also added that seeking a treatment in an emergency hospital was also quite expensive. Jihoon them mentioned that he was inspired by Suga’s kindness and later he helped Jimin when he needed the necessary IV when he feel sick. This shows Suga’s caring side, doesn’t it?