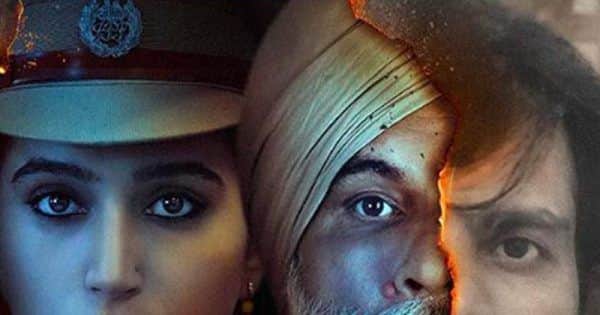 Barring Konkana Sen Sharma’s Amu (2005) and Vir Das-Soha Ali Khan’s 31st October (2015), Bollywood hasn’t really explored the 1984 Sikh Riots, at least nowhere near as they’ve done with other ghastly acts of communal violence throughout Indian history. Finally, an entire show comes along to extensively dig deep into the massacre faced by the Sikhs decades ago. So, how well does Zoya Hussain and Pawan Malhotra’s Grahan, on Disney+ Hotstar achieve this task. Well…let’s just say that despite a narrative that gets progressively repetitive and certain lackluster scenes, there’s enough of mystery and good acting in this web series to keep you hooked to the end.

32 years after the hotbed of the Sikh Riots, Bokaro, saw the community cut to pieces, an SIT team of top cops is sent from Ranchi to investigate the massacre and nab the culprits still at large – a decision motivated by the state CM’s suspicions over his opposition number. During the course of the investigation, Amrita Singh (Zoya Hussain) the head of the SIT team, finds undeniable incriminating evidence her father (Pawan Malhotra) in a totally different light, with a secret past life.

Watch the Grahan trailer below:

Grahan begins really well, and the first two episodes keep you thoroughly engaged and eager to know what happens next, and it’s a good thing, too, considering how the narrative keeps dipping from there on. It’s this initial hook that compels you to sit through the end and uncover the mystery despite the urge to sometimes give up midway. The other commendable factor of the show is Zoya Hussain getting a platform to showcase the extent of her talent after Mukkabaaz gave us a glimpse of it and Laal Kaptaan did nothing for her.

The highlight of the Disney Plus web series though is Anshuman Pushkar, who once again combines his raw, rugged persona with a remarkable underplayed act after Kathmandu Connection. Wamiqa Gabbi and the other supporting players, too, are pretty good and Ranjan Chandel and his co-writers’ script does have its solid moments that suffice to tide over the sloppy ones. Kamaljeet Negi’s camerawork, too, does well to capture the essence of the horror and differentiate the two timelines the show is straddled across. ON a side note, there’s absolutely nothing controversial about the show, it thankfully stays away from political commentary, and the Sikh community and what it bore back then is portrayed with utmost sensitivity. It’s high time people in our country learned to first watch something before getting their undies in a twist.

As Grahan progresses to its fourth episode, the narrative keeps taking one step forward and two steps back – the repetitiveness that plagues it is a major editing and direction issue that can’t be ignored after a point. Additionally, there are some glaring flaws with the depiction of age with certain characters, and considering that it’s a parallel narrative, they stick out like sore thumb as do some of major loopholes in the plot. If not for the underlying mystery that hooks you at the start as mentioned above, you’d be forgiven to let go of the show midway. The background score is also an ear-sore, doing noting to elevate the proceedings, and in fact, getting annoying after a point. However, the most shocking disappointment here is Pawan Malhotra, giving arguably his weakest performance of his illustrious career, where he substitutes depth for weird facial expressions and over-the-top body language. It’s bewildering to see an actor of his experience and calibre resort to such gimmicks, and we wonder how much it had to do with the brief given by Director Ranjan Chandel.

Take out some of the performances and that hook created at the start of the underlying mystery that you just have to see unfold by the end, and Disney Hotstar’s Grahan may have had to face its own “grahan”. Thankfully, it narrowly avoids such an ignominious irony. I’m going with 3 out of 5 stars.