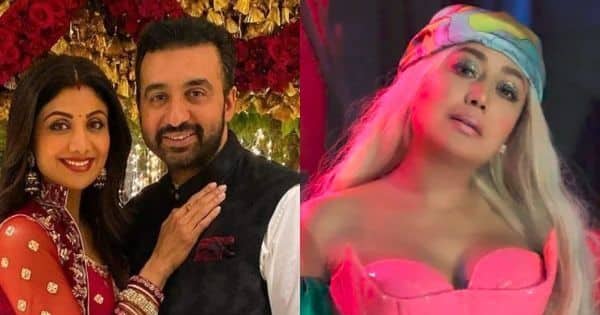 It’s that time of the day when we bring to you the trending entertainment news. Shilpa Shetty Kundra, Raj Kundra, Neha Kakkar, Saif Ali Khan, Arjun Kapoor, Tabu, Ali Fazal, Abhishek Bachchan, Vishal Bharadwaj, Aishwarya Rai Bachchan and others are a part of our top entertainment news today. So read on to know more about today’s newsmakers. Also Read – 7 rollicking affairs of Bollywood celebs that once made headlines but are now forgotten

Popular actress Shilpa Shetty Kundra recently told the Mumbai Police that she was busy with her work and did not know what her husband Raj Kundra was up to. Shilpa’s statement has been recorded in the charge sheet filed by the Mumbai Police on Wednesday against Kundra and Ryan Thorpe, who was the IT head of his company, Viaan industries. The Mumbai police have caught both individuals in the porn racket case and the charge sheet also details the evidence against them. Moreover, there are pieces of evidence about two others, Yash Thakur and Sandeep Bakshi, who have been accused in the case.
Read the full story here: Shilpa Shetty Kundra distances herself from Raj Kundra pornography case Also Read – Here’s how the Kapoor family ‘spoilt’ Kareena Kapoor Khan-Saif Ali Khan’s intimate wedding plans

READ ALSO |  Not Shah Rukh Khan, but THIS other Khan was the first choice for Dilwale Dulhania Le Jayenge

Bollywood buffs like most of us are always on the lookout for some insights into the likes and dislikes of their favourite stars, and Teri Meri Baatein will give some of those entertaining sneak peeks. The show will see the guests play the hosts too and give some latest gossip of B-Town celebrities. Teri Meri Baatein is all set to start with Saif Ali Khan and Arjun Kapoor. They will get together for a candid chat with each other, spilling some exciting beans. Also Read – Disha Patani all set for an out and out action film? Exclusive

Neha Kakkar is one of the well established singers of the Indian music industry. From Aankh Marey to Garmi, she has sung many hit songs. Recently, her remixed version of Kanta Laga along with Honey Singh hit the internet. Fans weren’t very impressed with it. The song received a thumbs down from the fans. And now, it is her look that is being trolled online. She decoded her Kanta Laga look and fans are bashing her for the same

Tabu, Ali Fazal and others roped in for Vishal Bharadwaj’s Khufiya

Netflix and filmmaker VIshal Bhardwaj have joined hands to bring us a spy thriller, Khufiya, inspired by true events and based on an espionage novel, Escape to Nowhere, by Amar Bhushan. Produced by Vishal Bhardwaj Films and directed by him, too; Khufiya is touted to be a story about Krishna Mehra, a R&AW operative, who is assigned to track down a mole selling India’s defence secrets, all along, grappling with her dual identity of a spy and lover. The film stars Tabu, Ali Fazal, Wamiqa Gabbi and Ashish Vidyarthi in pivotal roles.

Read the full story here: Tabu, Ali Fazal and others roped in for Vishal Bharadwaj’s Khufiya

Recently, a netizen posted a morphed picture of Aishwarya Rai Bachchan and Abhishek Bachchan from their wedding day on Twitter. In the picture, we see Abhishek and Aishwarya dressed in a wedding ensemble. The couple got married in 2007 and are parents to a nine-year-old daughter named Aaradhya. The picture grabbed attention as they flashed their million-dollar smiles for the shutterbugs.