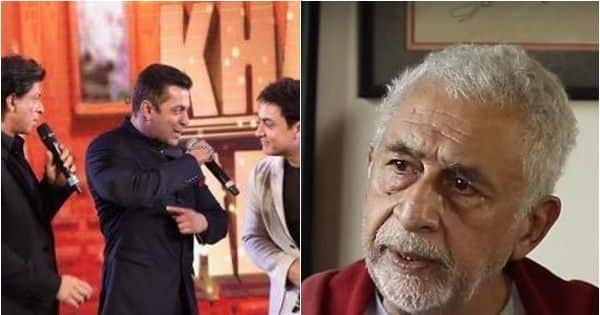 Veteran actor Naseeruddin Shah recently grabbed eyeballs when he posted a video slamming certain sections of Indian Muslims for celebrating the Taliban’s return to power in Afghanistan. His comments had received massive flak on social media. And now Naseeruddin Shah has opened up about why he thinks the top 3 Khans of the industry, Shah Rukh Khan, Salman Khan and Aamir Khan, never speak up about the important issues in the country. Also Read – Bollywood stars and their WHOPPING pay for endorsements will leave you speechless

Speaking about how a few big filmmakers and actors are being encouraged to make propaganda films, Naseeruddin told NDTV, “They are being encouraged by the government to make pro-government films, to make films lauding the efforts of our beloved leader. They also being financed, also promised a clean chit if they make movies which are propaganda, to put it bluntly. The kind of big-budget films that are coming. The big ones cannot disguise the jingoistic agenda.” Also Read – When Aamir Khan aka Mr Perfectionist delivered the biggest FLOPS of all times

Naseeruddin also cleared the fact that he never felt discriminated in the industry. However, he mentioned that those who speak their minds are often harassed. Talking about why the 3 Khans don’t speak up about issues, he said, “They (the Khans) are worried because of the harassment they will be subjected to. They have so much to lose. It will not be just financial harassment, it is not about losing an endorsement or two. It’s a question of their entire establishments getting harassed,” he said. He added that anyone who dares to speak out is subjected to harassment. “It is not just Javed saab or me, it is anyone who speaks out against this right wing mentality and it is growing on both sides.” Also Read – Shah Rukh Khan, Salman Khan, Aamir Khan’s WORST film decisions ever will leave you scratching your head

Over 150 citizens from different walks of life recently condemned the hounding of prominent Bollywood personalities Javed Akhtar and Naseeruddin Shah. In a signed statement, the citizens said, “We, the undersigned, unequivocally support the recent interview given by author and poet Javed Akhtar to the media in the context of the Taliban’s return to power in Afghanistan.

“We strongly condemn the attempts to intimidate him and affirm his right to speak his views. We strongly disagree with those in the Sangh Parivar, led by a BJP MLA and other elements from the same wider parivar, who have objected to the understanding of right wing supremacists, be it of the Muslim or Hindu kind,” they said.

They mentioned that in an interview to a news channel, Akhtar had spoken with clarity and passion. “We agree with his statement that irrespective of the religion in whose name they claim to speak, right-wingers — be they Hindu, Muslim, Sikh or Christians — share a common majoritarian world-view,” the statement said.

They further mentioned that this is particularly evident when it comes to their views on the status of Afghan women in the family and in the society. The statement said, “The Taliban are but an extreme and violent version of the same common fundamentalist mind-set. It is not for nothing that many in recent years have referred to the violent elements from the Sangh Parivar as the ‘Hindu Taliban’.

“It is not insignificant that around the same time as the venal reactions to the interview by Akhtar, sections of the Muslim community have raised similar objections to the recent comments by actor Naseeruddin Shah.”

The signatories claimed that in his video clip which went viral, Shah specifically addressed the Indian Muslim community, warning his Muslim compatriots against rigid forms of Islam, and advising an espousal of modernity.

“Shah is only reiterating the long, vibrant and tolerant tradition of Indian Islam that has been in recent decades afflicted by the Saudi-exported Wahhabi Islam, a trend that large sections of Indian Muslims recognise and also deplore,” the statement added.

READ ALSO |  If you're in love with Lisa's signature bangs, you need to thank this person for the same

The letter was signed by 152 prominent citizens, including admiral Laxminarayan Ramdas, documentary filmmaker Anand Patwardhan, and film writer Anjum Rajabali, among others.