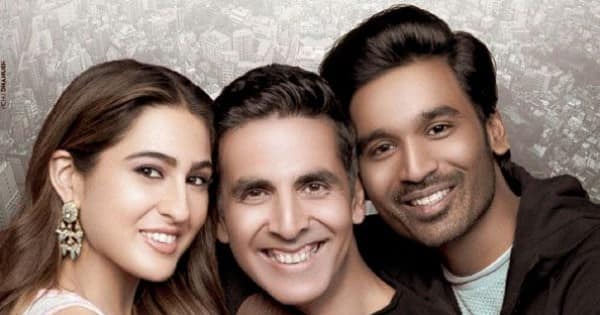 After Maharashtra government’s announcement of reopening of cinemas in the state, several filmmakers of Bollywood booked the festive and important slots for their respective release dates. While the makers of Bachchan Pandey, Prithviraj, Ram Setu and Raksha Bandhan featuring Akshay Kumar dropped the release dates and confirmed the theatrical releases of these ventures, the latest reports suggest that another Akshay Kumar headlined project Atrangi Re, which also features Dhanush and Sara Ali Khan in pivotal roles, will have a direct OTT release. Also Read – BREAKING! Akshay Kumar reveals all about the release of Atrangi Re, Raksha Bandhan, Ram Setu

The reason behind this decision is said that all the big films have booked the slots and there will be new release every week. Also, the film is not exactly a big-ticket release and that’s why the makers were going for different modes to get the desired reach to its target audience. Reportedly, the makers are on the verge of closing the deal with Netflix and will soon announce the release date. Also Read – Maaran, Atrangi Re, The Gray Man and more: Dhanush is set to showcase his acting mettle across the globe through these films

“To be honest, I haven’t yet included #AtrangiRe in the list because we are still mulling over whether it should be a theatrical film or an OTT release. And OTT may simply be the medium of choice for Atrangi Re, as it looks right now.”- Akshay Kumar.#AkshayKunar #Dhanush

Though it looks like the decision of the makers to release their film on OTT has backfired on them as fans on social media are saying that since the content of the film is not good enough, the makers have opted for a digital release. Also Read – Sunny Leone puts up a lovely post as she moves into a new home with fam; says, ‘Here we go baby love’

Talking about Atrangi Re, the film is directed by Tanu Weds Manu Returns, Raanjhanaa and Zero helmer Aanand L Rai. The film is co-written by his frequent collaborator Himanshu Sharma. It was earlier scheduled to release on August 6 but got delayed due to the pandemic crisis of COVID 19. The music of the film is composed by AR Rahman. Interestingly, this will be the second OTT release of Akshay Kumar, Sara Ali Khan and Dhanush after Laxmii, Coolie No 1 and Jagame Thandhiram. So, what are your thoughts on the OTT release plan of Atrangi Re? Tweet to us @bollywood_life.