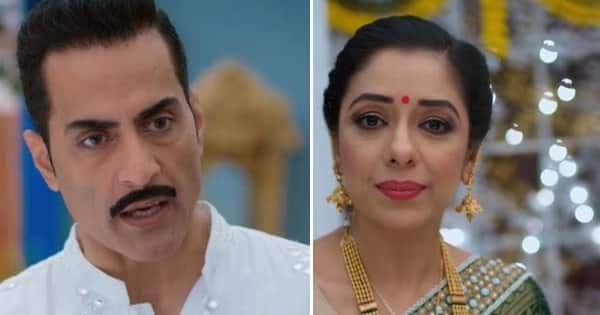 From the arm-wrestling match in Anupamaa to Sai’s stubborn behaviour in Ghum Hai Kisikey Pyaar Meiin, here is a look at what will happen on your favourite shows tonight… Also Read – Shaheer Sheikh, Hina Khan, Aishwarya Sharma – Meet the TV Instagrammers of the week who rocked social media with their posts

Anupamaa
In the coming episode we will see that Anuj Kapadia (Gaurav Khanna) and Vanraj (Sudhanshu Pandey) will get into an arm-wrestling match. This happens after Anupamaa praises his arm-wrestling. We have seen that Baa tells Kavya (Madalsa Sharma) to do the aarti of Ganpati. Vanraj also does not let her have a proper piece of prasad saying that she can eat at the residence of Anuj Kapadia. Anupamaa (Rupali Ganguly) tells Vanraj that he cannot stoop any lower than this. Later, everyone heads to the house of the Kapadia’s for the Ganpati Pooja. But Vanraj and Paritosh stay back. Later, AK calls up Vanraj inviting him personally. Also Read – Ghum Hai Kisikey Pyaar Meiin: Neil Bhatt, Ayesha Singh, Aishwarya Sharma celebrate as the show completes 300 episodes – view pics

Imlie
In the coming episode of Imlie, we will see that she is stopped from entering her college. It is revealed that she has been suspended from her college for the drunk drama. KC tells Imlie that they will win the case in the coming days as she is a determined girl. Anu and Malini are confident of victory. Malini says Imlie cannot prove them wrong on any level. On the other hand, Aditya is very upset with Imlie as his career has been badly affected. Also Read – TRP Report Week 36: Rupali Ganguly-Gaurav Khanna’s chemistry makes Anupamaa win audience’s hearts again; Khatron Ke Khiladi out of Top 5

Yeh Rishta Kya Kehlata Hai
We have seen how Sirat (Shivangi Joshi) misses her Maudi as she wants to eat Laapsi during her pregnancy. Suwarna makes laapsi for her. Sirat binges on it. Daadi (Swati Chitnis) says she finished three plates of Laapsi at once. Sheela tells them not to cast an evil eye on her daughter’s appetite.

Ghum Hai Kisikey Pyaar Meiin
We will see that Pakhi (Aishwarya Sharma) makes breakfast for the whole family. Sai will be missing from the table. Someone will say that she has escaped from the window. They discuss her interference in the transfer of Virat.