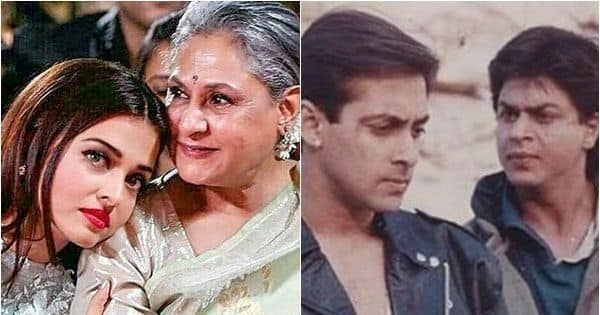 There’s no secret that now good friends, Shah Rukh Khan and Salman Khan, were once bitter enemies. In the past, the two had come to blows with each other at Katrina Kaif’s birthday party when SRK had apparently made an inappropriate remark on Salman’s ex girlfriend Aishwarya Rai Bachchan. However, Aishwarya’s mother-in-law Jaya Bachchan didn’t take Shah Rukh Khan’s remark lightly. Also Read – WTF Wednesday: ‘Are you pregnant?’ Dear fans, stop asking women in Bollywood and TV this cliché question

In an interview with People magazine, Jaya Bachchan had expressed her anger and displeasure over SRK’s comment on her daughter-in-law and even said that she would slapped him then and there if the superstar would have made such remarks if he was at her home. Also Read – Before Samantha Ruth Prabhu – Naga Chaitanya divorce rumours, reports of spilt of THESE much loved celeb jodis that rocked the film industry

“Of course, I do. I haven’t had the opportunity to discuss it with him, and I am going to speak to him about it. If he was at my home, I would have slapped him, just as I would my own son. But I have connected with him in my soul, and that’s it,” Jaya Bachchan had told the magazine when she was asked if she held anything against SRK. Also Read – Ponniyin Selvan: Not just Mani Ratnam’s magnum opus, Soundarya Rajnikanth to adapt epic Tamil novel in a web series; read deets to know more

This was not the only incident when Jaya had lost her cool on the King Khan. The veteran actress had made a scathing comment on his film Happy New Year saying that it was a nonsensical film and she wouldn’t have even bothered to watch it if her son Abhishek Bachchan wasn’t a part of it.

READ ALSO |  Satish Maneshinde says that the star kid is 'fortunate to get the best legal team'; says, 'One can imagine what would happen to a poor man'

Jaya’s remark certainly didn’t go well with SRK who had reponded to it saying that Amitabh Bachchan’s cult film Amar Akbar Anthony was also called as a nonsensical film but later it went on to become one of the most entertaining films of all time. Abhishek had then apologised to SRK on his mother’s behalf and now the Khans and the Bachchans share a great bond.