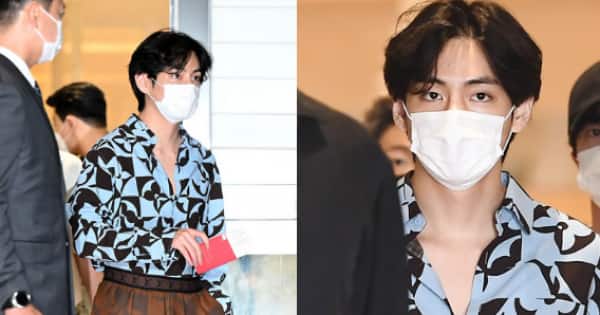 BTS aka Bangtan Sonyeodan were snapped at the Incheon airport just a couple of minutes ago. The boys, that is, RM (Kim Namjoon), Jin (Kim Seokjin), Suga (Min Yoongi), J-Hope (Jung Hoseok), Jimin (Park Jimin), V (Kim Taehyung) and Jungkook (Jeon Jungkook), have left for NYC for the UN Assembly in which they would be representing their country, South Korea, along with their president, Moon Jae-in. This is the second time that BTS would be attending UN Assembly. BTS made yet another stylish appearance at the airport. RM, the BTS leader was snapped in casual tracks whereas Jin wore a simple white tee and denim. Suga opted for a causal avatar as well. He wore a blue tee and black trousers. J-Hope wore track shorts, a tee and a hoodie whereas Jimin opted for an all-black look. He carried a statement case too. Taehyung opted for a blue-black shirt and brown designer pants that he fitted with a Louis Vuitton belt. Jungkook, on the other hand, wore a co-ord set that he paired with a black tee. Also Read – BTS: ARMY trends ‘Congratulations Jimin’ as the handsome hunk achieves THIS big milestone

BTS ARMY is trending ‘Have a safe flight’ for the boys. They are going gaga over their airport style statements. Some have said that they missed their airport looks, and indeed it is a treat. However, the Winter Bear singer, Taehyung, has grabbed the attention of the ARMY most. He has turned the airport into his runway again. V, aka Kim Taehyung, is considered to be the fashionista of the BTS boyband. His looks from events, MVs and appearances often go viral on social media. And the Most Handsome Man is at it again. ARMY is going gaga over Taehyung’s classy look. The Butter crooner went for a no-makeup look and had a mask up. But he oozed style nonetheless. Taehyung’s model-like features often leaving ARMY breathless. BTS ARMY is trending ‘Fashion Icon V’ on Twitter right now. Check out their tweets here: Also Read – Hollywood news weekly rewind: BTS’ Jungkook transfers ownership of $3.4 million worth flat to brother, Britney Spears gets engaged and more

when medias said V is considered as one of the biggest style icons in kpop, Fashion icon V indeed . Kim taehyung is the most fashion-forward dresserpic.twitter.com/AwsLgo9EzD

it seems that it went slow mo when FASHION ICON V appears ?pic.twitter.com/JctL1RU5JL

HAVE A SAFE FLIGHT ? pic.twitter.com/242Vf6gl8O

Various Kmedia has photographed Kim Taehyung departing to US with his Diplomatic Passport on hand!

Just Kim Taehyung in his runway at the airport. He’s such a material for modeling!

Have a safe flight to you baby and the boys @BTS_twt ♡

Please FASHION ICON V bless weverse with your selca HAVE A SAFE FLIGHT @BTS_twt
Look at that stare ?‍♀️? pic.twitter.com/4fho1Gldjf

He is such a runway model material ?♥️

Fashion icon V really make the airport as a runway! He looks so good!! pic.twitter.com/ZhP1bTwPFy

when medias said V is considered as one of the biggest style icons in kpop, Fashion icon V indeed . Kim taehyung is the most fashion-forward dresserpic.twitter.com/AwsLgo9EzD

BTS carried their diplomatic passports this time around which they were given a couple of days ago by the South Korean President. BTS were elected as the Special Envoys of South Korea. The diplomatic passport comes with loads of perks, it is said. Also Read – BTS: When Jimin was in tears and said his ‘voice was failing him’

READ ALSO |  When Suga's fan once threatened to sue him and said, ‘You're a dangerous man’