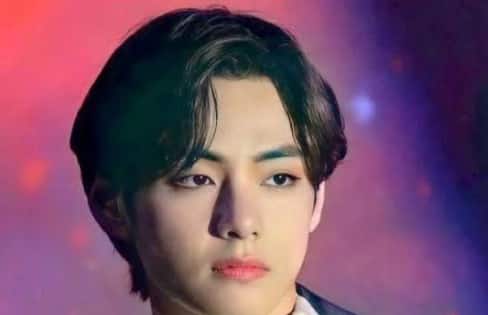 BTS’ Kim Taehyung is known for his vocals and looks. He is one of the most popular K-Pop idols globally. He has inspired many artistes all over the world. The recent addition is Russian ballerina Maria Khoreva. Well, she is not a new BTS fan. The young lady has been ARMY since some years now. She has made ballet videos on many BTS songs like Boy In Luv, Film Out and of course, Black Swan. We are sure the boys know that they have a fan in someone as talented as her. It seems she recently did a small Q and A with her fans. When someone asked her who was her fave, she said her bias was Kim Taehyung. Also Read – BTS: RM responds to ARMY’s posts, but his reaction to a post for ‘boyfriend’ Jimin takes the cake

Maria shared a gorgeous picture of V in a pastel shirt with a string of pearls. We can see how dreamy Kim Taehyung is looking in the picture. She also said that she loved Sweet Night. The soft number was sung by V for the K-Drama Itaewon Class, which starred his good friend, actor Park Seo Joon. Knowing how deeply passionate Kim Taehyung is about art whether it is photography or painting, it is not surprising that he’s equally magnetic for all artistes. Also Read – Hollywood News Weekly Rewind: BTS submits Butter as its first official entry for Grammy Awards 2022, Gwyneth Paltrow shares sex advice for her teenage kids and more

Kim Taehyung is the most popular idol in Russia since 2019. While the first three spots are taken by groups like BTS, EXO and Blackpink, he leads in the individual rankings. The singer charmed one and all even though he was injured during the Permission To Dance Stage Concert that was held last Sunday. Maria Khoreva is part of the Mariinsky Theatre and is known all over Russia. BTS is all set to perform in Los Angeles in November.