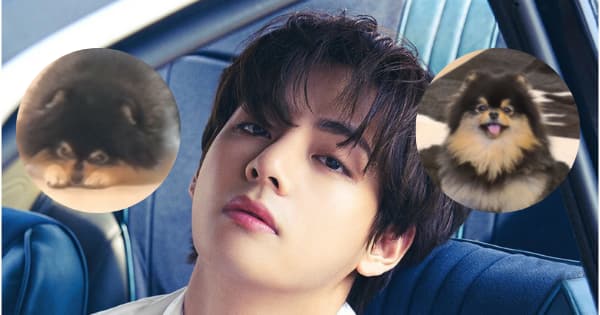 BTS and their pets are a rage amongst the BTS ARMY. They get showered with as much love on social media as their owners. But it is BTS’ V aka Kim Taehyung’s pet, Yeotan, who enjoys loads of love from ARMY. He seems to be the ARMY’s favourite. And they are showering love on Tannie again. It so happened that the Butter hitmaker shared a picture of Yeotan on the Weverse account. And the fluffy little Yeotan looks liked he is bowing down in respect as he is greeting the ARMY after a long time. BTS’ V greeted everyone on Yeotan’s behalf. “Hello,” the Winter Bear singer posted along with a deep dowing pose. Check out Taehyung’s post here: Also Read – How BTS’ Jimin smartly escaped a mishap during 2019 Melon Music Awards will leave you in awe of the singer – watch video

And as soon as V posted the picture on Weverse, the ARMY went mad over his pawwdorable picture. Some are busy gushing over Yeotan, while others are happy that Taehyung is back home with Yeotan. However, it could also mean that they are happy that Taehyung is back on Weverse. The Sweet Night crooner had been away from Weverse for a while. Check out their awwdorable tweets here: Also Read – MTV VMAs 2021: BTS wins Best Group and Best Kpop categories; share adorable messages for ARMY

taetae came home on weverse and he posted a yeontan pic pls i love the way he always post a picture of tannie ? pic.twitter.com/f3qWRI9JNA

Taehyung came homeeee ?????omg!! My day is made. This shitshow almost gave me a headache but Taetae saves the day again! ???? pic.twitter.com/HSJCGldpXK

TAETAE
HE CAME HOME WITH THIS LITTLE PONY!!!? AHHHHH!!! I MISS YOU!? AND I LOVE YOU SO MUCH:)) pic.twitter.com/Y7LCB06ZVd

BTS V’s display picture is also that of Yeotan. For those not in the know, Yeotan is a black and tan pomeranian that he adopted in 2017. Tannie, as the BTS ARMY fondly calls him, was born on 7 September 2017. Just a couple of days ago, ARMY celebrated Tannie’s birthday. They made him trend on the no. 1 spot globally. Also Read – MTV Video Music Awards: BTS land five nominations for Butter and Dynamite; Justin Bieber and Megan Thee Stallion also score big

Earlier, Yeotan lived with Taehyung, but he had to send him to his parents as he was unable to take care of Tannie due to his hectic schedule. Yeotan suffers from a health condition. Taehyung is very close to Yeotan. While adopting him, he had said that when he looked at Yeotan, he felt he needed a lot of love, attention and loads of hugs. And hence he adopted him.