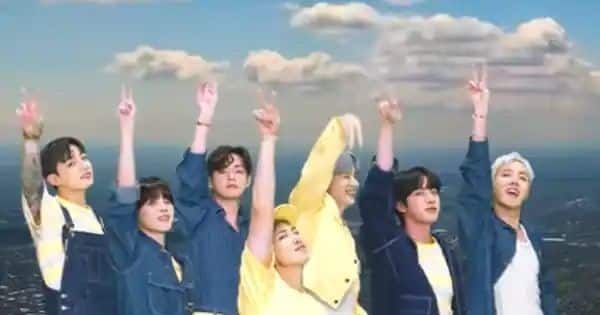 MTV Video Music Awards are happening at the Barclays Center today. At 8 PM EST (5:30 AM IST) the Best Group category was announced ahead of the Live show, at the Red carpet event and BTS is slaying it at the MTV VMAs already. Yes, BTS has won the Best Group & the Best K-pop. In the Best Group category the nominees were girl group BLACKPINK, Foo Fighters, Jonas Brothers, Maroon 5, Silk Sonic and Twenty One Pilots. And BTS grabbed the winner’s title. The group shared a pre-recorded acceptance speech where leader RM introduced the group in classic BTS style. Also Read – BTS’ RM birthday VLIVE: From flaunting the bike gifted by Jin to talking about his drinking habits and more – here’s all that happened in Namjoon’s live

Jimin added, “Thank you VMAs for the Group of the Year award.” RM joint in saying, “And ARMYs, this is all possible thanks to you guys. Though we can’t meet in person, we feel your love every minute, every second.” Suga concluded saying, “We love you and we miss you.” BTS won the Best K-pop category that had nominees like (G)I-DLE for DUMDi DUMDi, BLACKPINK and Selena Gomez for Ice Cream, MONSTA X for Gambler, SEVENTEEN for Ready to love and TWICE for Alcohol-Free. Also Read – BTS: Jimin wishes RM with a heartfelt note on his birthday and ARMY is going gaga over their emotional bonding – view tweets

Interestingly, before this announcement, Megan headed to court as her recording label was preventing her from releasing the single. However, things fell in place and the song released. Well BTS definitely knows how to win hearts with their amazing songs and hence they deserve this win.