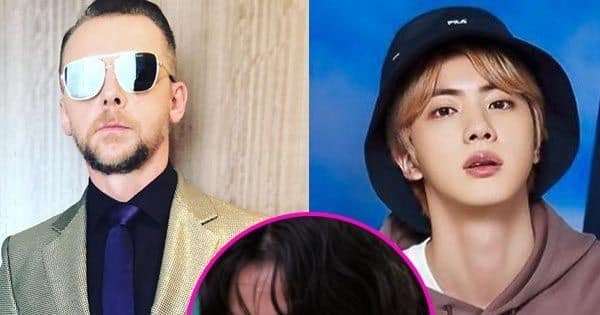 The No. 1 visual of the K-Pop industry, loads of charisma and a silver voice, BTS’ Jin is capturing the imagination of people the world over. While fans love his looks and low registers, Jin’s fans also want actor Jin to make a debut soon. He has a formal acting degree and has shown his finesse in so many videos. Of late, many Korean filmmakers, as well as ones from Southeast Asia are expressing an intention to work with Jin. Some of the famous ones are Shin Won Ho of Hospital Playlist and Prison Playbook fame. Now, British actor Simon Pegg wants to do a K-Drama with Kim Seokjin or even better the second season of Netflix’s Squid Game. Also Read – BTS ARMY, V aka Kim Taehyung’s prince avatar will leave you swooning – check out irresistible pictures

As we know, Squid Game is the current rage on Netflix. On the show, 456 who have financial woes play a deadly game to earn a prize of USD 38 million. It is written and directed by Hwang Dong-Hyuk. Simon Pegg is famous for his work in Spaced. He has also worked in films like Doctor Who (2005), Star Trek (2009-2016), Star Wars: The Force Awakens and the Mission Impossible series. His daughter Tilly is a huge BTS fan and has even made him an ARMY. In his live, he said he did be open to do a K-Drama with Jin and if he got a chance in Squid Game 2 with Jin it would be great. This is how fans reacted on the same… Also Read – BTS: Chris Martin calls THIS Bangtan boy’s voice perfect in My Universe; Courtney Cox agrees with him

this morning i was watching simon peggs instagram live and mentioned that him and jin in season 2 of squid game would be so good bc of this picture on netflix’s story, then i had to leave but i didnt realize he responded to the comment and agreed ? pic.twitter.com/1OIlKTJ4V5

i didnt realize he responded until i was scrolling and was this ? and was like wait… i think that was me pic.twitter.com/nKkKa77uUL

Both BTS Jin and Simon Pegg have great sense of humour. It would be a treat to see the singer acting. He has a formal degree from Konkuk College in acting and performing arts. He is hailed as pride of the college. Jin has said that he is surely interested in acting. But his focus right now is on his music. Also Read – BTS Poll: V, Jungkook, RM, Jin, Jimin, Suga, J-Hope – which one of the Bangtan Boys is a perfect date material? Vote Now