Juhi Chawla exposes Shah Rukh Khan’s bad habit; says, ‘SRK once came to a party at 2.30 am when everyone had gone home’ 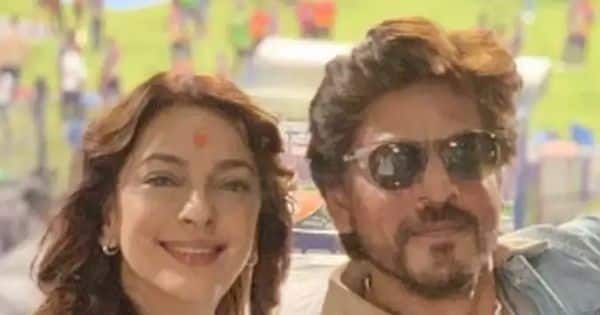 Juhi Chawla exposes Shah Rukh Khan’s bad habit; says, ‘SRK once came to a party at 2.30 am when everyone had gone home’

We all have that one friend in the group who always shows up late at parties and Shah Rukh Khan is one of them. His Darr co-star Juhi Chawla recently talked about SRK’s bad habit of arriving late. She recalled an incident where she had told the King Khan to come to a party at 11 pm and the superstar showed up at 2.30 am in the morning when everyone had gone home. Also Read – 10 weirdest photos of Akshay Kumar, Shilpa Shetty, Aamir Khan and others will leave you wondering if god exists

“Whenever there is a party at our house, we always invite Shah Rukh Khan. During one party, I had called him, and everyone was excited that he was coming, especially my staff because they wanted to take pictures with him,” Juhi revealed on the sets of Zee Comedy Show where she will feature as a special guest this weekend. Also Read – Rishi Kapoor birth anniversary: The makers of Sharmaji Namkeen drop FIRST POSTERS remembering the late actor

She recalled, “I had told him to come by 11 pm, but he had mentioned that he would come slightly late. Eventually he came around 2.30 am, by the time which the staff had left and I had slept. The food was also over, everyone had gone home and that’s when he came.” Also Read – When Salman Khan INSULTED these 5 Bollywood actresses publicly

Filmmaker and choreographer Farah Khan also commented on Shah Rukh Khan’s habit of arriving late and shared, “We all know that when we have a 9 am call time, Shah Rukh will come at 2 pm, but that’s fine. However, when he suddenly comes in at 11 am, things go for a toss. ‘Sab gadbad ho jata hai’ and we have to then change things around.”

Offering Shah Rukh a funny piece of advice, Farah added, “I feel late aa rahe ho, toh consistently late aao. (If you are coming late , then be consistent with it.)”

On the work front, SRK is busy shooting for his next Pathan, an action-thriller which also stars Deepika Padukone and John Abraham. The film is directed by Siddharth Anand. The superstar recently hinted at an impending release on Disney+ Hotstar. It remains to be seen if it was another publicity buildup for a forthcoming SRK venture, or just weekend fun. Only time will tell.