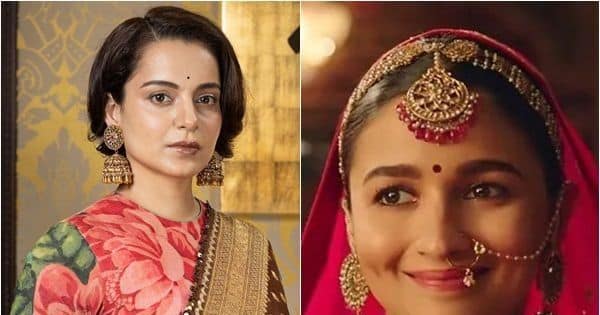 Alia Bhatt recently featured in Mohey’s digital film campaign which strives for a balance between tradition and equality, while celebrating the happy union of marriage. In the commercial, Alia’s character, a bride, is seen wondering if women were ‘paraya dhan’ (someone else’s wealth) meant to be given away to a man during ‘Kanyadaan’. The bride declares at the commercial’s end, “‘Kanyadaan nahin, kanya maan’ (Don’t give away your daughter as a gift; give her respect).” But it seems like Kangana Ranaut is really not happy about this new ad campaign. Also Read – Bollywood’s most gorgeous yoginis who swear by the goodness of yoga

Kangana took to her Instagram to call out Alia and her commercial for a jewellery brand that questions the tradition of Kanyadaan. She put up a long post highlighting the importance and history of Kanyadaan in Hindu culture. She also accused the brand of engaging in ‘anti-Hindu propaganda’ and asked her followers to seek a ban on the advertisement. Also Read – Katrina Kaif’s reaction when she learnt about Alia Bhatt’s crush on Ranbir Kapoor will leave you amused

“We often see a martyr’s father on television, when they lose a son on the border, they roar ‘Don’t worry, I have one more son, uska bhi daan main iss dharti Maa ko dunga. Kanyadan ho ya putradan, the way society looks at the concept of renunciation shows its core value system…” Kangana wrote in her post. Also Read – BTS Army makes ‘WeDemandApology’ trend in India after Spanish podcast

She captioned her post which reads, “Humble request to all brands… don’t use religion, minority, majority politics to sell things… Stop manipulating naive consumers with shrewd divisive concepts and advertising.”

In another post, where she explained Hindu marriage traditions, she added in the caption, “Don’t become a pest who loves to abuse and condemn Hinduism just because it is the most tolerant religion.”

Meanwhile, adding to the thought of a change from Kanyadaan to Kanyamaan, Alia Bhatt shared, “I absolutely believe in this thought and this is something very close to my heart. I am glad that I could be a part of this film and convey a message that might bring about a positive change in the society.”