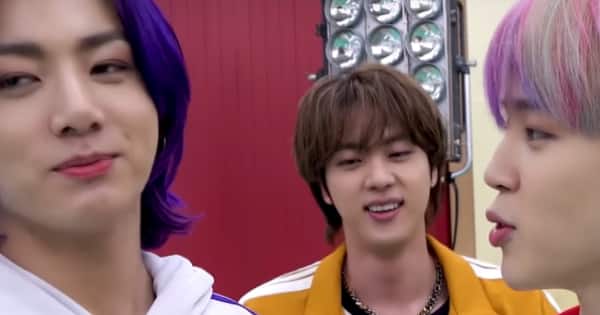 It is given that when the Bangtan boys are under one roof, craziness is bound to follow. While the music videos of K-pop band BTS are super fun, their fans also known as ARMY enjoy a lot more when some behind-the-scene footages come to light. We recently stumbled upon a fun video of BTS members Jimin, Jungkook and Jin from the time when they shot for their song Butter. Also Read – K-pop band BTS announces its virtual concert of 2021 ‘Permission To Dance on Stage’ and ARMY is jumping out of joy

In the video, we see all the three stars in an extremely fun mood. It starts with Jin explaining that they are shooting for the second verse of their song Butter. Soon we see Jungkook and Jimin entering the frame. Jimin looks into the video and says that he is lying and not to believe Jin. And then it is just total madness as we see all three pushing each other and not letting anyone talk. As they push each other they say ‘Aek’. We bet this video with leave ARMY in total splits. Watch it here: Also Read – BTS: Jimin wishes RM with a heartfelt note on his birthday and ARMY is going gaga over their emotional bonding – view tweets

Meanwhile, the Korean boy band is currently in the news as they have collaborated with rock band Coldplay led by Chris Martin. They have teamed up for a single called My Universe which will release on September 24. ARMY is more than excited to witness the magic of the two band coming together to make music. Also Read – BTS: Jin’s reaction to physically challenged fans grooving to the ‘Permission to Dance’ song will make you proud to be a part of ARMY

Apart from this, BTS also hit headlines as it was recently announced that their virtual concert has been held in the month of October. More than enough reasons for the ARMY to be happy, aek?