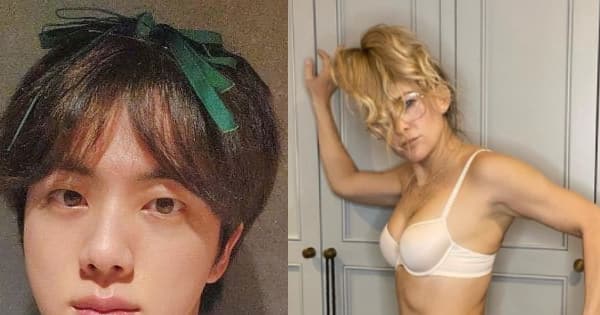 As the day comes to an end, here is the compilation of all the trending news from Hollywood. As usual, K-pop band BTS made it to the headlines. It was member Jin who grabbed the attention. Kate Hudson’s post for Breast Awareness month also received a lot of eyeballs. Scroll on. Also Read – BTS members dominate the ‘Husband Reveal’ trend on Twitter; RM and Jin fans congratulate #Namjin adding to the chaos

Why was Jin wearing green bow during Permission to Dance on stage online concert? Also Read – BTS: 7 emotional speeches by the Bangton Boys at Permission To Dance On Stage concert that touched ARMYs heart

BTS member Jin recently revealed the reason behind his green bow at the concert. He said, “Hello, this is Jin. Cute, right? This concert feels like a gift to you, ARMY. With that in mind, to wrap up, I prepared this with the intention of sending Seokjinnie as a gift…” jokingly added that the idea that he wore the bow because he was a gift was actually wrong. He then shared the real reason behind the bow and said, “I didn’t actually prepare it with this thought, but I just did it because there was this pretty item in the waiting room.” Also Read – BTS’ Jin’s speech about turning 30 at Permission to Dance on Stage online concert leaves ARMY worried

As it is Breast Cancer Awareness Month, Kate Hudson took to her Instagram account to share a photo that sees her just in her lingerie. She wrote, “It’s Breast Cancer Awareness month and I’m stretching my quads before joining my friends at @kitundergarments and @thirdlove as they kick it to cancer ? by donating 15% of sales from the #kitstokickcancer collection to Women’s Cancer Research Fund.”

Taking to her Instagram account, Kendall Jenner shared a few pictures from her friend’s bridal shower. In the photos, one can see her skimpily clad in a green bikini set. But it is her cowboy hat with her initials that steal the show.

To make Katy Perry’s birthday special, Orlando Bloom penned a sweet note on Instagram. He wrote, “We do life we do love and it’s fun. I’ll celebrate you today and everyday. ??✨I love you.” How sweet!

Travis Barker has taken his relationship with Kourtney Kardashian to the next level as he got her lips tattoed on his arm alleged covering the tattoo that he got for his ex-girlfriend. He also got a scorpion tattoo.