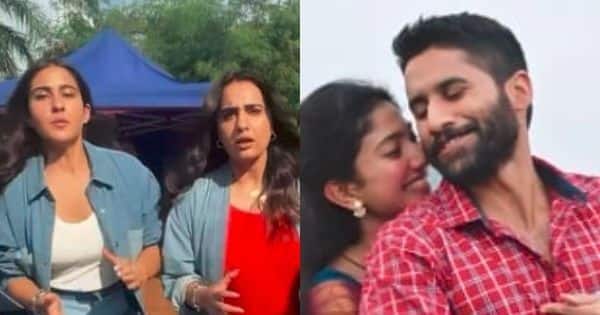 As the day is about to end, we are here with our trending OTT news today. Sara Ali Khan, Priyanshu Painyuli, Abhishek Banerjee, Nawazuddin Siddiqui, Taapsee Pannu and others are a part of our trending OTT newsmakers. Also Read – Trending South News Today: Chiranjeevi-Ram Charan’s Acharaya’s release date out, Vanitha Vijaykumar gives strong advice to Samantha Ruth Prabhu and more

Sara Ali Khan’s Squid Game video goes viral
Have you watched Netflix’s K-Thriller show, Squid Game? Want to play the Squid Game in real life? Well, the Korean Cultural Centre (KCC) in the UAE Capital is making the impossible possible for the fans who have loved the Netflix show. The survival drama involves children’s games and the show became one of the most-watched shows ever in history. Also Read – Thalapathy 66: THIS megastar’s daughter to star in Thalapathy Vijay’s bilingual? Here’s what we know

In Bollywood, we have seen several celebs, who possess a very intimidating personality and the versatile star Taapsee Pannu is one of them. In fact, in one of the interviews during the promotions of Haseen Dillruba, Taapsee said she thought costars Harshvardhan Rane and Vikrant Massey might be scared of her because of the image she has. Well, we can’t deny the fact that the Pink actress has an aura, personality and she’s such a powerful performer that it can make anyone a little intimidated. So we asked her Rashmi Rocket costars Priyanshu Painyuli and Abhishek Banerjee about their experience of working with Taapsee and whether they got intimidated by her.

Nawazuddin Siddiqui is worried about future of OTT in India

Nawazuddin Siddiqui is a worried man and the reason is the future of OTT in India. He told Bollywood Hungama that while OTT had a great start in India, problems started when established producers entered the scene. “For them, it’s a business. The way in which Netflix – and other OTTs – helped new directors and actors in India and gave them world recognition, I think it’s important for this to continue. The shifting that is happening now is a little scary,” said the actor. He added that these big producers can only think of ‘business’ and that they don’t have any idea about art.

Naga Chaitanya-Sai Pallavi’s Love Story to stream online from THIS date
Naga Chaitanya and Sai Pallavi starrer Love Story, which released on September 24 at the box office, turned out to be a money-spinner. Apart from fans, the romantic drama also garnered praises from stars like Mahesh Babu and Chiranjeevi Konidela. After becoming an outright success at the ticket windows, Love Story is set for its OTT premiere as it will stream on AHA Video from October 22.

Shahwar Ali to play a negative role in Girgit

‘Om Shanti Om’ actor Shahwar Ali is all set for his digital debut. Ali will be seen playing the antagonist in Girgit. “This is my first digital series and I’m damn excited about it. I’ve done films in the South and such, but to shoot for a digital series was pretty exciting,” Shahwar said on his digital debut. Talking about playing the brooding bad guy in the series, Ali added, “‘Lyndoh’ is the guy from Manali who runs a business. He is an extremely emotional guy and yet dangerous. So these are the two diabolically opposite qualities in him. What I loved about playing the character was that he is an extremely stylish guy and dons some really sleek attire. Also, it was a lovely experience to work with these young actors.”

READ ALSO |  Rajkummar Rao and Kriti Sanon impress in Hum Do Humare Do teaser, House of the Dragon teaser gives GOT feels and more