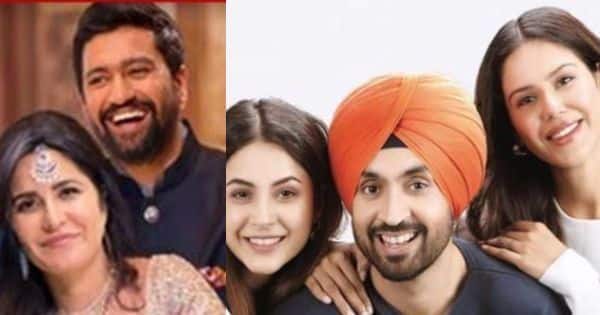 It’s that time of the day when we bring to you the trending entertainment news. Vicky Kaushal, Katrina Kaid, Shehnaaz Gill, Diljit Dosanjh, Sonam Bajwa, Shah Rukh Khan, Gauri Khan, Pooja Bedi, Aryan Khan, Madhuri Dixit and others are a part of our top entertainment news today. So read on to know more about today’s newsmakers. Also Read – From Wankhede ban to Aryan Khan’s arrest: 9 CONTROVERSIES from Shah Rukh Khan’s life that made headlines – view pics

Vicky Kaushal is rumoured to be dating Katrina Kaif. A couple of years ago, when they were spotted together on a festive occasion, rumours spread that the two of them had got engaged. Reports surfaced like crazy about their roka ceremony. Vicky and Katrina grew close after their candid confessions on Karan Johar’s Koffee couch. Also Read – Trending Entertainment News Today: Aryan Khan cries inconsolably during video call with Shah Rukh Khan and Gauri Khan; Netizens rally behind Shehnaaz Gill as Honsla Rakh releases and more

READ ALSO |  Disha Patani all set for an out and out action film? Exclusive

BTS members have won hearts with their singing and also with their adorable gestures towards others. Apart from being amazing performers, BTS members also have a heart of gold. Yes, and Jungkook has already proved it. Jungkook is the newest dog father in town and he recently introduced his Doberman, Jeon Bahm, in BTS In The Soop 2.

Pooja Bedi has supported Shah Rukh Khan and Gauri Khan’s son Aryan Khan in the drug case. She wrote on Twitter, “If no drugs were found on #AryanKhan isn’t it appalling that an innocent kid is made to spend days & days in lockup? Its psychologically damaging to be put in jail for no reason. The judicial system needs a major revamp… such systems create criminals by punishing innocents.”