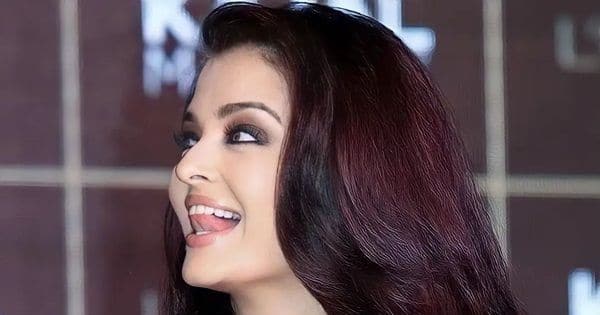 Before she finally found her life partner in Abhishek Bachchan and got married, Aishwarya Rai Bachchan has had her shot at love and relationships. But they didn’t go the way she must have planned in the beginning. Her most talked about and controversial love affair was with Salman Khan. Their love began on the sets of Sanjay Leela Bhansali’s film Hum Dil De Chuke Sanam. It was also being said that Aishwarya and Salman were planning to get married but their relationship ended on a bitter note. She then dated Vivek Oberoi but it was short-lived. In an old interview, Aishwarya had opened up about how it is not easy for her to fall for any guy while sharing her views on love at first sight, frivolous relationships and fly-by-night-affair. Also Read – Abhishek Bachchan surprises Aishwarya Rai Bachchan on Karwa Chauth; Amitabh Bachchan pens a heartfelt note

“I don’t play up to anyone, and I’m certainly not a tease. I don’t need to bat my eyelashes at any hero. I relate to men almost in an asexual manner. I’ve never been violently attracted to a guy at first sight, it’s just not my thing. I need to know a guy over a period of time to get serious. Relationships can get emotionally exhausting, and I know when I’m in love, I’ll give it my all. I can’t get into a frivolous relationship or a fly-by-night-affair. I’m not mentally attuned to all that,” Aishwarya had told Filmfare in an interview. Also Read – Anushka Sharma, Alia Bhatt, Katrina Kaif and more – 9 Bollywood beauties who are also talented photographers and click the most viral-worthy pics

In the same interview, she had also talked about her looks and how it does not affect her work. “I am born with good looks but that does not overshadow my hard works and talents. I work very hard and have never given any chance to any of my directors to complain about me,” she had said. Also Read – Trending South News Today: Samantha Ruth Prabhu REACTS to Kangana Ranaut’s Dhaakad avatars; Mani Ratnam’s major update on Ponniyin Selvan

Aishwarya married Abhishek Bachchan in 2017 and their wedding was one of the most talked about events in the industry. They welcomed their first child, a daughter, Aaradhya Bachchan who was born on November 16, 2011.

On the work front, Aishwarya has wrapped up shooting for Mani Ratnam’s Ponniyin Selvan which is slated to release in 2022. A picture of hers from the sets was leaked online wherein she was seen dressed in a red traditional sari.