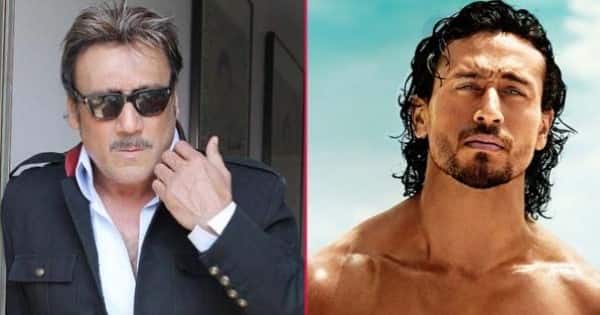 The young superstar of Bollywood, Jackie Shroff has established himself as one of the biggest actions stars of the industry thanks to his capability of performing some daredevil stunts, which se saw in Baaghi franchise, Heropanti and War. While Tiger’s rugged and rough avatar is one of the X-factors of the star, his look during Heropanti grabbed the headlines, when trolls said that he looks feminine and even compared him with Kareena Kapoor. Also Read – 9 times birthday boy Tiger Shroff showed us that he is a He-Man in sexy bare essentials

At that time Tiger’s father and veteran actor Jackie Shroff gave a befitting reply to trolls and said that one cannot expect him to born with a beard. Talking to BT, Jackie said, “About this whole macho macho comparison, he is young. He is still growing. He is a cub for God’s sake and he is getting there. Also, I am glad that he does not look like what people expect him to. Matlab Jackie ka bachcha hai toh daadhi ke saath hi pait se bahar aayega kya? Giving his comment on Tiger’s comparison with Kareena, the Radhe actor asserted, “Being compared to Kareena! Ha ha so cute. And you should see his replies to those comparisons and memes. He was cool with it. He knows his action well so he knew when he fought on screen or danced, he looked like a Tiger. It’s tough for a guy to dance well when he is good at action. But he does both well.” Also Read – Baaghi 4: This young actress to be paired opposite Tiger Shroff in Ahmed Khan directorial?

In fact, Tiger also addressed this thing when he appeared on Arbaaz Khan’s Pinch and said, “Before the release also, I used to be trolled a lot for my looks. People used to say, ‘Is he a hero or a heroine? He doesn’t look like Jackie dada’s son at all.’ It was a deliberate move to play to my strengths.” Also Read – Heropanti 2: Tiger Shroff-Tara Sutaria’s actioner will be shot in London, New York, Moscow, Manila and Tokyo from December

On the professional front, Tiger Shroff is currently lined up with films like Heropanti 2, Baaghi 4, Rambo remake and Ganapath.

READ ALSO |  Vivian Dsena to play a character on the lines of Shahid Kapoor's Kabir Singh for his next show? Read deets