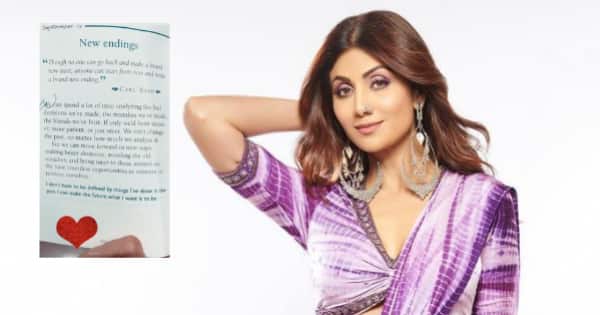 Shilpa Shetty’s businessman husband Raj Kundra was arrested in July this year in the alleged pornography content creation and distribution case. Shilpa Shetty had taken a break from everything to look after her family for some time. Her name often grabbed headlines whenever any development cropped up. A couple of weeks ago, Bollywood Hungama had reported that Shilpa was planning to lead a separate life from Raj Kundra. Last month, the actress returned to her professional life and resumed shooting for Super Dancer Chapter 4. Throughout, the actress has been sharing quotes on her Instagram handle that have been grabbing headlines as well. And the Hungama 2 actress has done it again. She shared a quote on ‘New Endings’ in her Instagram stories. Also Read – Anupamaa SPOILER: Anuj to turn messiah for Anupamaa again after Vanraj ousts her from Shah house

The Carl Brand quote read, “Though no one can go back and make a brand new start, anyone can start from now and make a brand new ending.” It further stated, “We can spend a lot of time analyzing the bad decisions we’ve made, the mistakes we’ve made, the friends we’ve hurt. If only we’d been smarter, more patient, or just nicer. We can’t change the past, no matter how much we analyze it. But can move forward in new ways making better decisions, avoiding old mistakes and being nicer to those around us. We have countless opportunities to reinvent or reorient ourselves.” Also Read – Salman Khan’s niece Alizeh Agnihotri wins netizens’ hearts with her new ad; is a Bollywood debut on the cards? – watch video

It concluded with a statement that said, “I don’t have to be defined by the things I have done in the past. I can make the future what I want it to be.” Ever since the arrest, Shilpa Shetty has been sharing her thoughts through such posts. She shared a heart emoticon alongside the post. Check out the post here: Also Read – Bigg Boss 15: Mohsin Khan, Tina Dutta, Manav Gohil – 15 Celebs fans may get to see in Salman Khan’s show

Shilpa Shetty recently visited Vaishnav Devi Temple in Jammu Kashmir. She was spotted at the Mumbai airport on her return journey. She was snapped with her friend.