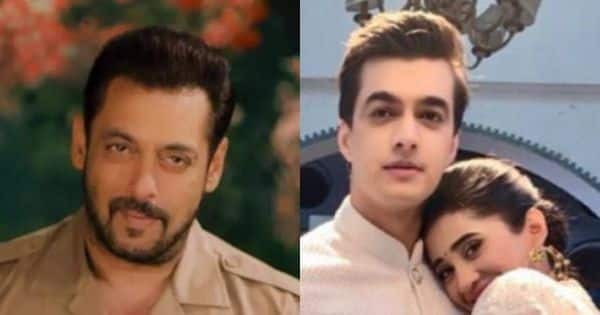 The day is about to end and we are here with all the important stories of the day. From Bigg Boss 15’s confirmed contestants list to Mohsin Khan and Shivangi Joshi’s last shoot day in Yeh Rishta Kya Kehlata Hai, here are the trending TV news of the day. Also Read – Bigg Boss 15: Karan Kundrra, Tejasswi Prakash, Umar Riaz and more – Meet the 9 CONFIRMED contestants of Salman Khan’s show

Bigg Boss OTT ended recently and Divya Agarwal was declared as the winner. And now, it is time for Bigg Boss 15. It is just few days left for the show to begin and this year again we have an exciting theme. This years’ Bigg Boss 15 is said to have a jungle-based theme. The contestants will go throw the jungle first and then enter the main Bigg Boss 15 house. During the launch of the show, Umar Riaz, Donal Bisht, Nishant Bhat and Shamita Shetty were introduced as confirmed contestants on the show. On the other hand, Pratik Sehajpal has already been confirmed after he opted out of Bigg Boss OTT and took the ticket to Bigg Boss 15. Now, the latest promo of the show has introduced four more contestants. Yes, in the promo, we see a glimpse of the four contestants. Tejasswi Prakash is introduced as the one who likes to play with danger. Next, Karan Kundrra is introduced as superstar while Simba Nagpal is the shaktimaan shikaari and Afsana Khan as singing cuckoo. Also Read – Bigg Boss 15: Bigg Boss 14’s Pavitra Punia shares her excitement for the new season; says, ‘Dekhte hain kaun kitna jaanwar niklega’

Arjun Bijlani has taken home the Khatron Ke Khiladi 11 trophy. The handsome actor beats the likes of Divyanka Tripathi and Vishal Aditya Singh to bring home the prize. In an EXCLUSIVE chat he told Bollywood, “It was mentally challenging to be part of the show. The pandemic was at its peak and I had to leave my family to go to Cape Town. But once I got there, I told myself to take one day at a time and keep moving forward. What was my modus operandi, one day at a time. ” Ever since, the news of him being in the finale surfaced, fans of other contestants, especially Divyanka Tripathi Dahiya started tweeting asking the channel to ‘unbiased’ and ‘fair’ . Nowadays, fans seem to assume that every show is only won by channel favourite including performance-oriented ones like Khatron Ke Khiladi 11. Arjun Bijlani tells us, “It is very sad. This show is not based on who people like or the channel prefers. It is based on who performs a stunt faster or with more finesse.” Arjun Bijlani elaborates, “The finale stunt, I did it faster. The other day Divyanka did some stunts faster. I was better on that day, the channel was not doing the stunt. Once people see it, they’ll know it is a tough tough stunt, and Divyanka was caught in the net for a while. Everyone who saw the stunt knew I did it faster.” The handsome actor also spoke about rival fans trending negative stuff on him. He opined, “The point is everyone wants their faves to win. Her fans felt she should have won, my fans wanted me. I did it faster so I won. I did not win as the channel wanted me to win. It is odd to think or assume that’s how all reality shows work. I take such comments with a pinch of salt.”

READ ALSO |  Kahaan Hum Kahaan Tum producer Sandiip Sikcand to bring Karan V Grover-Divyanka Tripathi together for a show? Here's what he has to say

Arti Singh reveals why she disconnected with Sidharth Shukla

Arti Singh had a successful stint on Bigg Boss 13 and many attributed it to the wonderful support she got from Sidharth Shukla, who was one of her close friends. But after his demise, it has come to the fore that she was not in touch with him for two years, and revealed why she did so. Arti Singh told The Times Of India that she regrets doing so. As we know, he passed away in the first week of September. Arti Singh said the talk and criticism of her coming in between Sidharth Shukla’s equation with Shehnaaz Gill impacted her emotionally and mentally. This was why she decided to stay away from him.

Eijaz Khan and Pavitra Punia have been going strong ever since Bigg Boss 14 got over. People had not expected their love story to last but the are indeed going strong, and even thinking of a future together. The two recently visited the Jim Corbett National Park in Ramnagar, Uttarakhand. On the way, they stopped at Delhi and met Pavitra Punia’s family. Eijaz Khan had already met her brother who works in Pune. This was his first time with her folks. He revealed that he was damn nervous. Eijaz Khan told The Times Of India, “I had already met her brother in Mumbai. So this time, I met her mom and her dad. We spent some time together, and they were very welcoming. I didn’t feel that I was meeting them for the first time, probably because they have seen too much of me in Bigg Boss.” The actor further said that he was so nervous that his palms began sweating and he told Pavitra to fill in the awkward silences in between. He told the paper, “It was nice, but next time I will open up a bit more. I had sweaty palms and was a little awkward. But I had already told Pavitra that if there are awkward silences, jump in and start talking.”

Neha Kakkar grabbed headlines last year for her wedding with Rohanpreet Singh. One of the most loved pop music artists in India, Neha has always been the one to make news for various reasons. Remember when just after her wedding with Rohanpreet, she had flaunted a picture with a baby bump? In case you have forgotten, it was for their song Khyaal Rakhya Kar. The simple picture had gone viral on social media in no time and had led to various theories. Right from Neha being pregnant before marriage to the size of the baby bump and more, it was such a talk of the town. Neha was also trolled for the same. And now, in a recent interaction on the sets of The Kapil Sharma Show, Neha Kakkar revealed her mother-in-law’s reaction back when the song had been released. Neha said that even mother-in-law seemed to be fooled by the bump. She told the host, Kapil Sharma, “Actually, sach bataun toh jab gaana aaya tha, Khyaal Rakhya Kar, aur usme tummy dekh kar mumma ji kehte hai, ‘Beta, good news kaafi jaldi nahi ho gayi?’ Maine kaha, ‘Mumma ji, kum se kum aap toh aise mat bolo, aap toh sab jaante ho, humari toh abhi shaadi hui hai, abhi mile hai’ (To be honest, when the song Khyaal Rakhya Kar came out and my mother-in-law saw my tummy, she remarked, ‘Isn’t it too soon to be giving us good news?’ I told her, ‘At least you don’t say this, you know everything, you know we just met and got married’).”

READ ALSO |  Do agree with Tejasswi Prakash, Shamita Shetty and Vishal Kotian that Jay Bhanushali gave up early on in the captaincy task? Vote now

There have been rumours of Jay Soni and Ragini Khanna starrer Sasural Genda Phool returning to small screen with season 2. The show had a massive fan following back then. The aired from 2010 to 2012 and was loved by the audience. It was reported that the show will be produced by Ravi Ojha Productions and will be creatively helmed by Zama Habib. The show in its earlier edition aired on Star Plus and now it would be Star Bharat. A source close to the portal said that Work on Sasural Genda Phool’s new season is on and it will in all probability launch on Star Bharat. Now, a picture of Jay Soni and Supriya Pilgaonkar has gone viral on the internet. It seems they both have begun shooting for Sasural Genda Phool 2. However, we could not find Ragini Khanna in the picture.