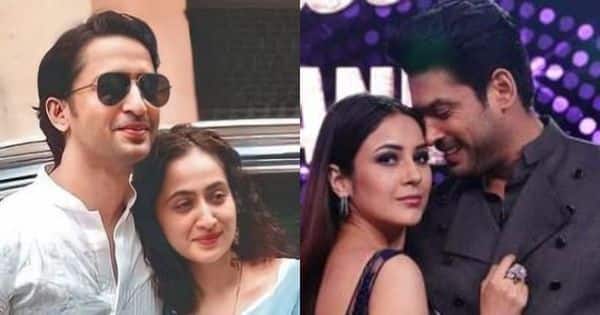 The day we wait for every week is finally here. Yes, it’s Saturday and we know why it is your favourite. Well, we bring to you guys all the big stories that took place this week in the television industry. So if you have missed out on something important this week, then catch up all those stories here. From, Bigg Boss 15 participants names to Shaheer Sheikh and Ruchikaa Kapoor’s baby girl, here are all the important stories of the week. Have a look at the biggest stories of the week. Also Read – Indian Idol 12’s Pawandeep Rajan-Arunita Kanjilal to be a part of Nakuul Mehta-Disha Parmar’s Bade Acche Lagte Hain 2?

Shaheer Sheikh and Ruchikaa Kapoor were blessed with a baby girl on September 10. In an interview with Hindustan Times, Shaheer Sheikh confirmed the news. He said that being a parent is a big responsibility. He also revealed that he always wanted a girl and dreamt of becoming a father. He even told his wife, Ruchikaa about it. He shared that his friends always call him a principal and think of him as the responsible one at every party. Shaheer told that he is the one at parties who reminds people not to be too loud or don’t do this. Shaheer was excited when he got to know about Ruchikaa being pregnant as he loves kids. The Yeh Rishtey Hain Pyaar Ke actor has three nieces and one nephew and he revealed that he took care of them for months. Shaheer also recalled a moment from his modelling days. He shared that he was once asked what would he do if he woke up as a woman. Shaheer said that he would like to get pregnant. Also Read – Trending TV News Today: Shaheer Sheikh opens up on the time he was jobless before Mahabharat; Karan Kundrra approached for Salman Khan’s Bigg Boss 15 and more

We are still unable to believe that Sidharth Shukla is no more. He passed away on September 2 due to a heart attack. He was rushed to the Cooper hospital wherein he was declared brought dead. His postmortem had been going on since a lot and his body was handed over to the family on September 3. The Balika Vadhu actor’s last rites were done at the Oshiwara crematorium. His demise shattered Shehnaaz Gill. She was completely broken and watching her in that state broke many hearts. Celebrities who visited Sidharth’s house revealed that Shehnaaz is in a bad condition. There were several reports that she isn’t eating enough and has become weak. Reports also said that she might need hospitalisation. In an interview with Spotboye, Abhinav Shukla revealed that he and Rubina Dilaik met Shehnaaz’s mother. He also mentioned that she is coping well. Abhinav said that he is praying that Shehnaaz and Sidharth’s family get all the strength. He also mentioned Shehnaaz is coping up now. Punjabi actor-singer Diljit Dosanjh and Bigg Boss 13’s Shenaaz Gill’s romantic comedy film Honsla Rakh is one of the most anticipated projects of the year. #SidNaaz fans are quite excited to see Shehnaaz in a never seen before avatar. The fans have been eagerly waiting for an update on her upcoming film Honsla Rakh. On Wednesday, Diljit took to his Instagram stories and shared that the singer will soon start dubbing the songs for the film. He even revealed that the teaser of Honsla Rakh will be released soon. #SidNaaz fans cannot keep calm and have been showering their love on Shehnaaz’s upcoming project.

Anupamaa is one of the most talked-about and loved TV shows in the country. It stars Rupali Ganguly, Sudhanshu Pandey and Madalsa Sharma starrer TV is topping charts every week. And ever since Anuj Kapadia aka Gaurav Khanna’s entry, the TRPs of Anupamaa have sky-rocketed. The introduction of Anuj as Anupamaa’s college friend has worked in favour of the makers. Fans of the show are loving Anupamaa and Anuj’s bond on the show. Their chemistry and their scenes are what they look forward to every day. We all have seen how magical is the chemistry between Gaurav Khanna and Rupali Ganguly. It is not the millennial one and has old school vibes. Anuj has been head over heels in love with Anupamaa since their college days but moved away when she got married. The way he cares for Anupamaa is being loved by the audience.