BTS makes Butter its first official submission for Grammy Awards 2022, Jennifer Lopez and Ben Affleck make efforts to see each other amidst busy schedules and more 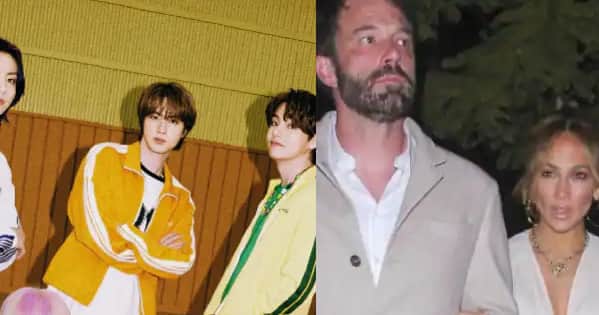 BTS makes Butter its first official submission for Grammy Awards 2022, Jennifer Lopez and Ben Affleck make efforts to see each other amidst busy schedules and more

Korean boy band BTS has made its first official submission for Grammy Awards 2022. The Bangtan Boys have submitted their top performing song Butter in the category of Best Pop Duo/Group. If approved, they will be competing against Kiss Me More by Doja Cat featuring SZA, Without You by The Kid LAROI and Miley Cyrus, Rumors by Lizzo featuring Cardi B and Mood by 24kGoldn. Also Read – Rust movie set incident: SHOCKING! Alec Baldwin fires a prop gun; accidentally kills cinematographer and injures director – deets inside

Given their busy work schedules, it is being reported that Ben Affleck and Jennifer Lopez are finding it difficult to spend time together. However, a report suggests that they are making their best possible efforts to see each other. A source told E! News, “They are working out their schedules so that they can be sure to see each other every few days. Things are good between them, and they are staying connected. They are busy with their projects, but also making time to be together.”

On the sets of Rust, a fatal incident took place when Alec Baldwin allegedly shot a prop gun that killed a cinematographer. An update in the case suggests that criminal charges have still not been ruled out. As per a report in The Hollywood Reporter, district attorney Mary Carmack-Altwies while speaking to New York Times said, “Everything at this point, including criminal charges, is on the table.”

Gwyneth Paltrow recalls the time when she ‘almost died’ during delivery

During her appearance on Armchair Expert, Gwyneth Paltrow spoke about giving birth to her daughter and how is was a horrifying experience. She said, “I had two cesareans, my daughter was an emergency. It was crazy—we almost died. It was, like, not good.”

Taking a look back over the Halloween costumes of the family, Kris Jenner shared a photo dump on Instagram. The pictures sees Kim Kardashian, Kourtney Kardahisna, Kendall Jenner and others dressed for perfectly for Halloween over the years.