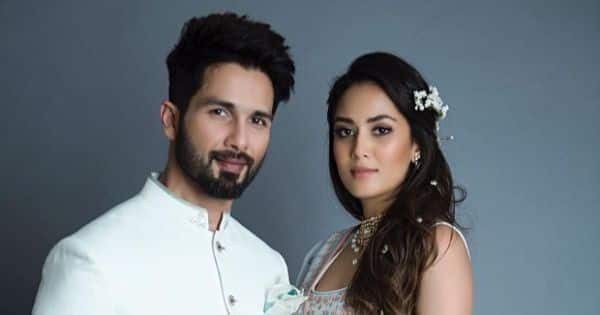 Shahid Kapoor is currently vacationing in the Maldives along with wife Mira Rajput and their kids Misha and Zain. Now, Mira took to Instagram to share a selfie. While she looked fab, we couldn’t help but notice Shahid in the background. He was back facing. Mira’s made a pun and wrote, “Back at it.” Have a look at the picture below: Also Read – Shahid Kapoor’s wifey Mira Rajput flaunts Maldivian tan in latest mirror selfies; we like! VIEW PICS

Also Read – From swanky apartments to expensive cars: Shahid Kapoor and wife Mira Rajput’s net worth and most expensive possessions will blow your mind

A day before, Shahid had shared a picture from the same spot. He had captioned it, “Hang in there.” Also Read – After Kareena Kapoor Khan’s Jeh, netizens go ga-ga over Shahid Kapoor’s son Zain’s voice

On the professional front, Shahid will next be seen in Jersey which is scheduled to release on December 31, 2021. The film’s release has been delayed due to the pandemic. After fishing the film, Shahid had written, “It’s a film wrap on #jersey …. 47 days of shoot during covid. Just unbelievable. I am so proud of the entire team. It’s nothing short of a miracle. I want to thank each and every one from the unit for coming to set every day, putting themselves at risk and doing what we all love doing. Telling stories that touch hearts and make a difference. Jersey is a story that speaks of a Phoenix rising from the ashes. The triumph of an indomitable spirit. If there was ever a time I could connect with the underlying spirit of a film this was it. As we all fight through this pandemic. Let’s always remember. This shall pass too. Here’s to my best filmmaking experience yet. Here’s to Jersey … we shall overcome !!!! @gowtamnaidu @mrunalofficial2016 @geethaarts @amanthegill @srivenkateswaracreations” Recently, Shahid had spoken about the same and said, “God has been kind. I am fortunate to be an actor. It was a far off dream. Ambition is to do justice to every opportunity and every character I play. Dil se kaam karna hai (I want to work wholeheartedly). That’s it.”