Did Sunny Deol fight with Hema Malini for ruining Dharmendra’s relationship with his mom Prakash Kaur? 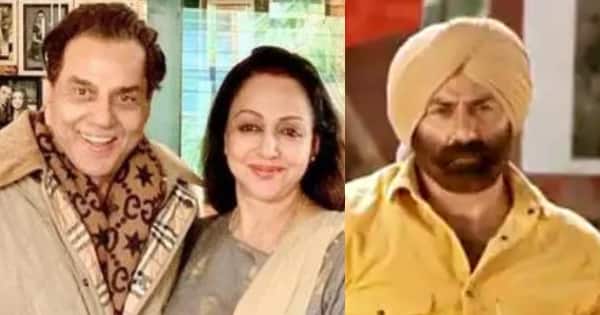 Did Sunny Deol fight with Hema Malini for ruining Dharmendra’s relationship with his mom Prakash Kaur?

It is Hema Malini’s 73rd birthday today. The Dream Girl still remains to be one of the most of the most gorgeous divas of B-to wn ever. Her love affair with Dharmendra also remains to be one of the most iconic ones. History has it that Dharmendra was already married when he feel in love with Hema Malini. He was married to Prakash Kaur and had children – Sunny Deol and Bobby Deol. But did you know that Sunny Deol had allegedly gone to fight with Hema Malini for snatching away Dharmendra from the family? Also Read – Twinkle Khanna recalls a director asked her to ‘do a Mandakini’ and her EPIC reply proves she’s a real HEROINE!

For long, it has been speculated that Sunny Deol and Bobby Deol do not share very cordial relationship with step-mother Hema Malini. In fact, supposedly there was a fight too. A report in Pinkvilla stated Sunny Deol, who was pretty young when Dharmendra decided to marry Hema Malini, had gone to meet Hema Malini and fight with her over the same fiasco. However, their mother Prakash Kaur had rubbished all these rumours then. She had allegedly stated that even though the family was disheartened by the decisions made, it is not their upbringing to go and fight with someone. Also Read – You would be surprised to know that Bobby Deol was the first choice of these Bollywood blockbusters

Years later, during the launch of her biography, Hema Malini had spoken about her bond with Sunny Deol. “Everyone wonders what kind of a relationship we (Sunny and I) are having. It is very beautiful and cordial. Whenever it is necessary, he is always there, along with Dharamji, especially when this accident happened. He was the first person to come and see me at home, and he saw that the right doctor is there for the stitches that were done on my face. I was really taken aback to see him showing so much interest. That shows what kind of a relationship we are having.” Also Read – Trending OTT News Today: Bobby Deol bags another award for Aashram, Shiddat motion poster celebrates the beauty of love, Justin Bieber Our World release date out and more