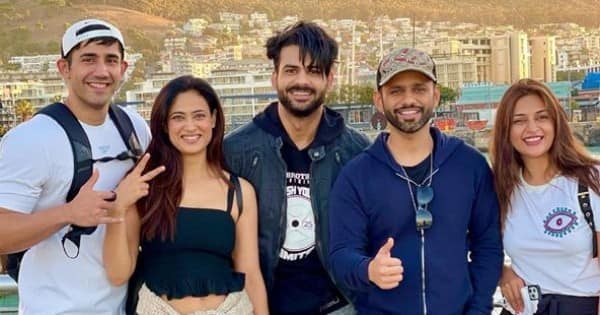 Khatron Ke Khiladi 11 has finally got its top 6 finalists in the form of Divyanka Tripathi, Arjun Bijlani, Shweta Tiwari, Rahul Vaidya, Varun Sood and Vishal Aditya Singh. The show’s host Rohit Shetty has come up with an innovative stunt that truly tested the skill, strength and ability of the contestants. Shot during the pandemic in Cape Town, the stunt-based reality show has been making headlines because of its daredevil stunts and the winning spirit of each contestant. Also Read – TRP Report Week 35: Nakuul Mehta-Disha Parmar’s Bade Acche Lagte Hain 2 fails to dethrone Rupali Ganguly, Gaurav Khanna’s Anupamaa

Over the weekend, the show witnessed double elimination in the semi-finals. Abhinav Shukla and Sana Makbul tried their best to sustain but couldn’t get through. Though the two pushed themselves to the limits to perform their respective stunts, but luck didn’t favour them and at the end, Abhinav and Sana had to bid adieu to the show following their commendable journey. Also Read – Bigg Boss 15: Tujhse Hai Rabta actress Reem Shaikh to be a part of Salman Khan’s show?

It remains to be seen who among the top 6 finalists will lift the winner’s trophy on the Khatron Ke Khiladi 11 grand finale, which will air on August 25. Also Read – Devastated, exhausted, broken: Shehnaaz Gill fainted twice during Sidharth Shukla’s cremation? Read deets

And since, there’s only 1 week left for the show to end, we conducted a poll to ask the audience, who according to them will emerge as the winner with maximum votes.

Cast your vote below:

Keep watching this space for the latest updates on Khatron Ke Khiladi 11.