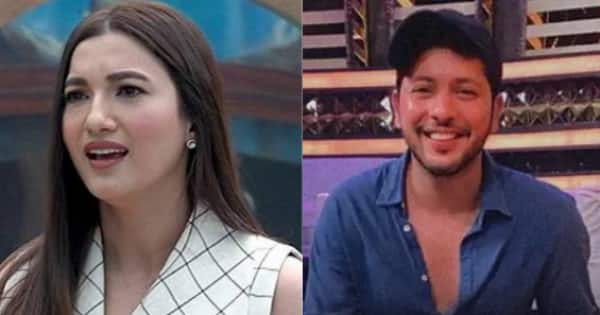 Bigg Boss OTT has got their top five finalists in Divya Agarwal, Shamita Shetty, Pratik Sehajpal, Raqesh Bapat and Nishant Bhat. And recently, in the episode of Bigg Boss OTT, we saw reporters grilling the housemates. And at that time, Nishant was asked about his comments on Gauahar Khan. For those not in the know, a clip had gone viral from the live feed where Nishant, Akshara Singh, Moose Jattana and Pratik Sehajpal were having a conversation about previous winners of Bigg Boss. And thence had come up a topic about Gauahar Khan’s win. Nishant had brushed off Gauahar’s win saying she would just keep bickering all the time. Gauahar’s fans had lashed out at him and even the Begum Jaan actress had also slammed Nishant for his comments. Also Read – Bigg Boss OTT: Akshara Singh and Moose Jattana celebrate Neha Bhasin’s ouster; former says, ‘Chundi Bahar Gayee’

And now, we a reporter had asked him about the same, Nishant had denied ever saying such a thing and said that media would have twisted it around. And now, Gauahar Khan yet again has a savage retort for Nishant. The actress took a jibe at him saying he would have short term memory loss. She said that she has forgiven him already and urged everyone to spread positivity and love only. “Short term memory loss !!! N dignity too ! We forgive him Nayan ! may god bless all souls ! n make the good souls shine brighter ! Love u.” Check out her tweet here: Also Read – Bigg Boss OTT: Moose Jattana finds Shamita Shetty and Raqesh Bapat’s connection boring; says, ‘Baat karne layak hi nahi hai’ [EXCLUSIVE]

It seems Nishant really has got short term memory. Coming to Gauahar, she had slammed Nishant in a very savage manner back then too. She had said, “Agar sirf chillane se log bb jeet jaate toh nishant ke haath mein pehle hafte mein trophy hoti ! Hahahahahahah . Guys take light , forgive him ! A loser attitude won’t know what it takes to be a winner . First as a human being n then of the biggest show of the country !”