Ieshaan Sehgaal and Meisha Iyer get lovey-dovey and snuggle up in the house; we wonder ‘Yeh Kab Hua, Kaise Hua’ 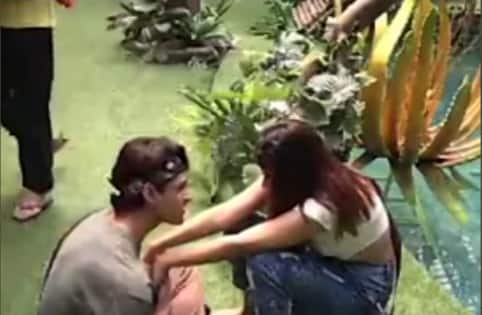 Ieshaan Sehgaal and Meisha Iyer get lovey-dovey and snuggle up in the house; we wonder ‘Yeh Kab Hua, Kaise Hua’

Bigg Boss 15 is high on drama and fights. It is obvious that everyone wants to stand out. There are some rank newbies too who are desperate to be seen on the show. It looks like a love angle is forming between Meisha Iyer and Ieshaan Sehgaal. Today, the two were seen sitting together. We do not know if there is some real attraction or they are trying to create some content. It is evident that Meisha Iyer and Pratik Sehajpal have some past history. But their equation on Bigg Boss 15 has been fraught with fights. They have been squabbling non-stop. Also Read – Bigg Boss 15, day 6, October 7 Live Updates: Vishal Kotian says he will instigate Shamita Shetty

We can see that the two are getting close. Ieshaan Sehgaal is also being taunted by Pratik Sehajpal for his closeness to Meisha Iyer. He has called her the bodyguard of the girl. People were suspecting a love angle between Pratik Sehajpal, Meisha Iyer and Simba Nagpal. But it looks like Ieshaan is moving ahead. The two look set to stay longer if they continue this drama. Pratik has been trolling Ieshaan for the very same reason. Also Read – Bigg Boss 15: Tejasswi Prakash and Umar Riaz lead in votes count; Jay Bhanushali trails shockingly behind

The show is turning in favour of the junglewaasis as Karan Kundrra has dented the team spirit of the OTT people. Tomorrow, we will see the first captaincy of the house happening. Around five people now have their suitcases, which is a good thing. What do you feel about Meisha Iyer and Ieshaan Sehgaal’s game on the show? Also Read – Bigg Boss 15: Kushal Tandon and Prince Narula get into a late-night social media spat after the former slammed Karan Kundrra as ‘Jananni’ for age-shaming Shamita Shetty?