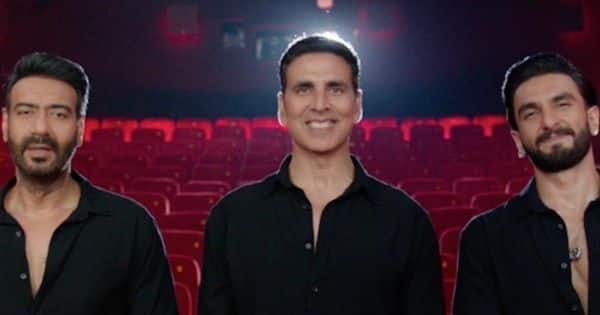 At long last, Sooryavanshi is finally releasing in cinema halls across the country. A grand Diwali release on 5th November has been locked for the Rohit Shetty directorial, which people have been waiting for with bated breath since one and a half year, when it was supposed to release prior to the first lockdown. And part of the excitement is watching a a true-blue multi-starrer on the big screen after a long time, where actual superstars are sharing screen space. That being said, practically everybody knows that Ajay Devgn and Ranveer Singh have extended cameos in Sooryavanshi. So when do they join Akshay Kumar in the Rohit Shetty film and how big their roles exactly are and how much of a difference it makes to the narrative? Well…we’ve got the inside scoop for you on all this, so read on… Also Read – Adipurush: Kriti Sanon wraps the shooting of Prabhas starrer; says, ‘My heart sinks as I let go of this super special character’

A well-placed source within the industry has exclusively informed FilmDhamaka that Sooryavanshi begins with Ajay Devgn. Yes, Singham will have the opening scene in the movie to himself. After that, till before the interval, the entire focus will be on Akshay Kumar’s eponymous character, with decent screen space also dedicated to his love interest, played by Katrina Kaif. Then, before the interval Ranveer Singh will make his entry, post which, we’ll again see Simmba after the interval. Finally, all three, Akshay Kumar’s Sooryavanshi, Ajay Devgn’s Singham and Ranveer Singh’s Simmba will join forces for a no-holds-barred, adrenaline-pumping, full-on climax that lasts for 35 minutes, where Rohit Shetty is expected to have pulled out all the stops. Also Read – Sooryavanshi locks release date: Akshay Kumar, Ajay Devgn, Ranveer Singh welcome audience to the theatres on November 5

Well, if this turns out to be true, then we must say that the audience is going to get their money’s worth, right? Also Read – When Bollywood’s Top stars made headlines for their extramarital affairs