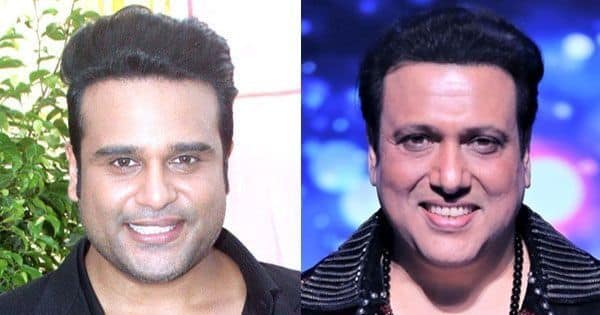 Comedian Krushna Abhishek and his uncle Govinda’s tiff has taken an ugly turn in the last few months. The mama-bhanja continue to be at loggerheads and their relationship turned sour. Recently, after Krushna decided to skip an episode of The Kapil Sharma Show after knowing that Govinda and his wife were going to be a part of it their fight grabbed all the attention. Govinda’s wife Sunita then slammed Krushna and addressed the issue in a recent interview. She said that she doesn’t want to see Krushna’s face ever in life. After Sunita’s statement, Krushna was asked by the paps for his take. The actor turned comedian was getting clicked while taking home Lord Ganesha’s idol on the auspicious occasion of Ganesh Chaturthi. Also Read – TRP Report Week 36 by ORMAX MEDIA: BIG SHOCK for Anupamaa; The Kapil Sharma Show climbs up the chart; Taarak Mehta Ka Ooltah Chashmah continues to rule the roost

Krushna said, “Main chahata hu yeh bhi problem Ganpati ji solve karde parivar ki kyuki hum sab ek doosre ko pyaar karte hai ..bhale internal issues hote hai..woh bhi solve hojaye bas yehi pray karta hu. (I pray Ganpati ji to solve the internal issues between our families. Despite issues, there’s love between us)”. But Sunita had dismissed the possibilities of any reconciliation between the two families. Now, Krushna Abhishek has asked for forgiveness from his uncle and his wife. In an interview with Spotboye, Krushna Abhishek said that the issues between his family can be solved. The comedian has asked for forgiveness, saying that he is extremely distressed by the confrontation. He said that he is ready to apologise to Govinda and Sunita repeatedly if needed. Also Read – Trending Entertainment News Today: Nargis Fakhri confesses dating Uday Chopra; Tony Kakkar’s response to troll and more

READ ALSO |  Fans of Umar Riaz slam makers for not showing enough of him in the TV telecast; trend WE WATCH BB15 FOR UMAR

Krushna Abhishek said that he loves his mama and mami and has earlier tried to ask for forgiveness but they don’t accept his apology. He says that he has no idea why they don’t accept his apology. Krushna also said he is upset by his aunt Sunita’s explosive interview against him. Krushna Abhishek said, “I know my mami said a lot of things against me. Of course, I was upset. But now I feel they are so angry with me because they love me the most. Saying something as filmy as ‘I don’t want to see his face ever again’ shows they are hurt. And you can only get hurt by someone who loves you.” Also Read – Trending TV News Today: Munmun Dutta slams trolls over her alleged relationship with Raj Anadkat; Kashmera Shah on Krushna Abhishek’s fued with Govinda and more